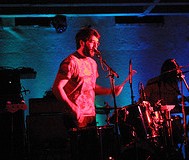 I created the opportunity to see Feral Children and Dead Confederate at the Doug Fir in Portland Tuesday night, then saw them again Wednesday at Chop Suey. Back-to-back shows on weeknights are always grueling, but this lineup, which also included Apollo Sunshine, was more than worth it.

Feral Children remind me of a litter of adorable feral kittens I once encountered in the woods near Eugene, Oregon. Both are skittish if approached too quickly; feral kittens scamper away and feral music (in my experience) overwhelms. Both are intriguing, though and once familiar, the payoff is immense. Kittens are cute and Feral Children’s elements, once sufficiently absorbed from a distance, meld into something much greater than the sum of each contributor’s efforts, as they did Tuesday night.

Wednesday’s set at Chop Suey was better, at least in part due to the appreciative audience that gathered early. The difference between the two nights illustrated how important crowd response is – none of the bands were given enough from the audience in Portland, but Seattle’s crowd kept the energy going, giving Feral Children back as much as was dished out as favorites “Jaundice Giraffe”, “Zyghost” and “Spy/Glass House” were offered and most willingly consumed.

Dead Confederate is an amazing live band. Masters of buildup and payoff, they drew me in with gorgeous songs like “Wrecking Ball” and “Get Out” that took me back to warm Georgia nights when I would sometimes sneak into a downtown Augusta cemetery with friends and wander forbidden among headstones in the dark. Dead Confederate conjured the same hair-raising tingles I experienced looking over my shoulder for ghosts or security guards and the same stolen elation every time we got away with it. Live, their songs creep in like the mist that hung in ribbons over the small graveyard stream until they suddenly explode in searing brilliance.

The Doug Fir held a small but attentive audience that included a few stoic front-rowers more interested in their video footage than the unbelievably good band right in front of them.

The crowd warmed and grew as the set progressed and the last songs including “Tortured Artist Saint” were well received.

Chop Suey’s crowd the next night was ready for Dead Confederate. “The Rat” and “Heavy Petting” were met with enthusiasm and energy that was given right back, fueling an intense set I’ll not soon forget. Come back soon, Dead Confederate!