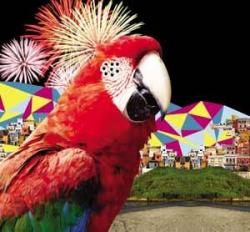 In college I took a world music class, having only heard a bit of Indian music and some African drumming at the time. Not only did I learn about musicology, I learned how to play a thumb piano, count in the cyclical fluid way that Indians keep time and even had my spin at African tribal drumming and performance. Since that class I've been entranced by world music, especially African music (that's where we all came from right?).

There is something about world music that American music lacks… a transcendence maybe.. an ability to step inside a culture and feel the earth below their feet as they play, a primal movement of sound that's more than a premeditated piece of sheet music. Canary Islands born Barcelona artist PabloDiaz-Reixa (known as El Guincho) wrangles in calypso, tropicalia, doo wop and trance into a meticulous carnival of global sound that achieves just that. His album Alegranza! melds the most ethnic aspects from the far reaches of our earth into a very modern, infectious and refreshing album.

Self-described as space-age exotica, El Guincho relies heavily on sampling and electronica-based techniques but takes the steely feeling out of it by blending it with so many organic sounds. Alegranza! has been compared to Panda Bear's Person Pitch, and the comparisons are inevitable with the rotating sample-loops, hazy repetition and diffused underwater aesthetic. Alegranza! achieves something a bit different though, creating a party out of found sound and tribal chanting, exotic steel drums and a pulsating club feel that pulls your body into dance. Childlike high-pitched choruses and clapping waylay intochinging percussion on "Buenos Matrimonios Ahi Fuera" and is deeply layered with many different percussion instruments: brushes on a drum, a scratchy guiro, bright tambourine splashes.

The intro to "Fata Morgana" eludes to a Boards of Canada style of ambient music, with calming synths and the sweeping sound of what I can only imagine to be a shooting star. The song quickly progresses into a sunny mid-tempo romp, melting under the intensity of its brilliant arrangement. Every track on Alegranza! is full of depth and true universal warmth and every track feels like a mish-mash of the best songs you haven't heard yet. Hypnotic and celebratory, Alegranza! cracks open the preconception of popular music and incorporates an exultant, hippy-like humanity that cheers for the soul.

El Guincho takes your rich technicolor dreams and turns them into reality on this album, bringing you to a place you thought you'd lost. A place that is abso-freaking-lutely irresistible.