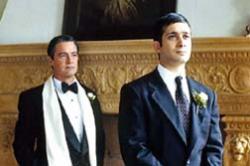 Touch of Pink and Open Water

Thirtysomething Alim (Jimi Mistry), a London film set photographer with an Old Hollywood fetish, has an imaginary friend: the ghost of Cary Grant (a spot-on Kyle MacLachlan), a dashing spectre who's constantly quoting movie dialogue and gossiping about defunct co-stars. He also tends to pop up at inopportune moments to dispense bad advice, and in that way he's not unlike Alim's meddlesome momma (fierce and wonderful Suleka Mathew), who, on the eve of her nephew's three-day wedding spectacular, drops in on her closeted son and his non-imaginary infidel boyfriend (decidedly cute Kristen Holden-Ried). Pressed into damage control, Imaginary Cary convinces Alim to pass the lover off as a roommate. Hilarity ensues.

Really it does! As trite as it all is, as reminiscent of Ang Lee's The Wedding Banquet as it becomes, Touch of Pink is an undeniably enjoyable time at the movies. Granted (tee hee), the charade (tee hee) becomes tiresome after a while (Imaginary Cary even makes a priceless crack about the lack of gust in the windmills of Alim's mom's mind), and I found myself wanting to tell Alim to just grow the fuck up. Really, though, who wouldn't want to hang out with a Kyle MacLachlan parody-homage of Cary Grant all day long?

It took about 35 minutes for this film to grab me, and it still hasn't quite let go. Not that I've ever had the desire to participate in anything scuba-related, but now I can say for certain that vintage Jacques Cousteau
will sure-nuff be plenty for me.

Think Jaws with a Blair Witch sensibility. will sure-nuff be plenty for me. Blanchard Ryan and Daniel Travis play a yuppie couple who hope a tropical scuba vacation will soothe their tense relationship. But they find that they really don't know from tension until they discover themselves marooned in the middle of the ocean… with sharks!

It may take a leap of faith to get past the fact that the scuba team wouldn't have thought to institute a roll call before the damn boat left. (I mean, hello.) But once the protagonists are stranded, brace yourself. No flashy special effects, no scary mechanical beasts, and yet director Chris Kentis has managed to make his micro-budget suspense flick a dread-heavy thrill: it's amazing what he's achieved power-of-suggestion-wise with sharp editing and vivid lightning-tinged photography.

The braver-than-me actors were reportedly in the water — with sharks! — for more than 120 hours during filming, and they do a decent enough job given the limitations of the setting. (Especially the lovely Ms. Ryan, who someone should cast as Charlize Theron's sister pronto.) Though the film could be a bit tighter (the initial setup does tend to drag), I'll reiterate: after Open Water, I won't be strappin' on an air tank or squeezin' into a wetsuit ever.