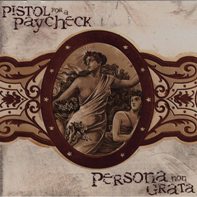 Persona Non Grata, the debut label release from Seattle four-piece Pistol For a Paycheck, starts with a growl. This is gritty punkrockandroll, a collection of passionate fury, and they want us to know.

The guys in P4P are still youngins (23 is the age of the eldest), and their songs reflect this. The material, lyrically and musically, on Persona Non Grata shows that they still have a ways to go in developing mature songs, but their promise definitely exists. They could stand to get a little tighter as a band (but also keep in mind I'm simultaneously reviewing the new release from The Hives, who at this moment are at the top of their game. It's a touch comparison!). P4P holsters a lot of energy behind their powerful punch.

The band aspires to Iron Maiden's metal love one moment then melds into something of a throwback to 90s grunge, but with a punk-tinged sword. Kye Hillig's vocals show impressive potential — At the Drive-In and Dead Kennedys come quickly to mind.

The mix on Persona is not great. The guitars (Hillig and Aaron Peters, who also shares vocals) get a little buried while the drums (James Cole) pound strongly atop all. Bassist David Bilbrey gets a tad lost in the shuffle, but his rumblings are still detectable. Nonetheless the core of the band is captured on the raw disc and, if nothing else, picking up a copy will help you recognize the material when they play a ferociously live show.

{Speaking of which, why not read igDana and igChar's live review of Pistol for a Paycheck from July 2003?}