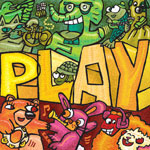 If you've spent any time working with kids, raising kids, or just watching kids' TV shows, you may agree with what I've seen during a handful of years teaching elementary school, and now having a young one of my own: there are three categories of music entertainment "for kids."

I'm happy to report that the new DeSoto Records compilation Play never comes close to category 1, and instead falls enjoyably between categories 2 and 3.

This is definitely kid-friendly music, led by standout tracks like "Nellie The Elephant," by Sgt. Major, and "Picnic," by the Young Fresh Fellows. There are other tracks like "Truck on Truck," by the Cassettes, whose unending refrain and bombastic rock star "yeeeaaaah's" would undoubtedly elicit a roll of the eyes and a smile from any tween (high praise in the tween world). Over the course of these songs, you'll find moer than one song in the batch that will work for the kid(s) in your life–be it student, child, or even a friend's child (let's face it, most adults who pick up this album will have some connection with kids).

Kids, in general, have a waaayyyyy higher sense of wit, sarcasm, and wry humor than the hapless fools in marketing give them credit for. This is especially true of the Seattle kids associated with the Vera Project, a grassroots music/arts center run by and for youth, which is the recipient of a portion of Play's profits. This compilation has that Vera feel–in both its art and edge. Play should be commended, if only because it could strike discomfort in the SUV-driving suburban Mom intent on sheltering her kids from all the world's ills with a monogrammed bedroom ensemble.

It would probably be too much to ask that all the tracks on a compilation could achieve that success of "getting" kids. Some of the tracks on Play, like Visqueen's serious improvement on the John Fogerty classic "Centerfield," are fun as Hell, and yet — not sure that song's going to resonate with a kid, really. Again, who knows? I think that's the question for anyone who decides they want to make music, or any art, for kids. Who am I doing this for? The why almost doesn't matter. Just pick the kid, in your mind, see their wary gaze, and blow their doors off.

Kids are a hot, hip market right now, and Play definitely outdoes the khaki-shrinkwrapped marketing tools you find by the registers in Pottery Barn Kids (poor Louis Prima). Play clearly proclaims its intent to be cool rock for kids. There's not a suburban Bellevue backyard barbecue with matching dinosaur plates among this crop of edgy, rocking songs. It's music for the hoodie-clad Vera kids' younger brothers and sisters, and at least half the time, you can picture their specific eye-rolls, nods, and toe-tapping, as they relent and enjoy it.