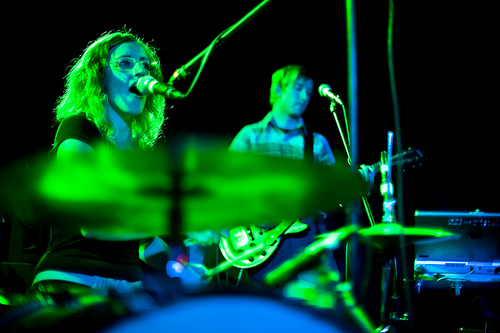 The lineup at Chop Suey on Saturday night was uneven. It started strong with Grant Olsen’s project away from Arthur and Yu. The country twang of his songs was subsumed by The Moondoggies harmonies ringing out behind Olsen’s slow, almost spoken, singing. The songs were tight and the bass hooks kept even their simplest songs interesting. This didn’t sound like a side project.

Next, Black Whales played a derivative set accompanied by an epilepsy-inducing light show. Song by song, Black Whales delivered tunes that wore their influences on their sleeve. The extra toms and cymbals next to the full drum set seemed superfluous, as the main drummer was the best part. The band seemed to flounder for a distinct sound, something that would make a listener say, “hey, isn’t this Black Whales?” Rather than ask if it’s The Stones.

The Pica Beats, a band whose sound leaves a gentle wake behind it, followed them. Often compared to The Decemberists, The Pica Beats have a majesty all their own. First, Barrett doesn’t sing like he’s got a mouth full of “r’s”. Second, his lyrics are not as narrative driven as Maloy’s. Also, The Pica Beat’s are more rooted in a mystical, otherworldly quality, brought on by the use of sitar.

I first saw The Pica Beats at Healthy Times Fun Club. I was immediately impressed by how good they sounded in a basement space. Colin English’s drums were clean and Adam McCollom’s keyboards were clearly audible over them. Alice Sandahl’s mic wasn’t loud enough, but Ryan Barrett’s vocals and Garret Kelly’s bass-playing antics made up for it. I bought their album, Beating Back the Claws of Cold, immediately.

The floor at Chop Suey got crowded and the band’s enthusiasm was infectious. Their set was comprised of enriched, energetic versions of their songs. The intensity of the show was so amped-up that Kelly broke a bass string, smacking away on “Hope, was not a Smith family Tradition.”

Back on stage with fresh strings, The Pica Beats played “Summer Cutting Kale,” a mellow tune whose hues shift in technicolor with the notes played on the melodica. Live, this slow-starter was consumed by an instrumental fervor that rose fast, the percussion crashing, the bass romping, and by the end the entire band was yelling.

They ended on the hard-hitting “Territoire,” a song whose impact lay in the contrast of sparse verses and an intense chorus. The drums thrust their weight in and continued to accelerate till the song’s end. The band stopped playing and their voices rang out in slightly out of key, and completely endearing harmonies.

The broken bass string led to the unexpected performance of “Work in Progress,” played solo by the brainchild behind The Pica Beats, Ryan Barrett. The song was a hopeful sign of a future release that does them justice. The band has a new lineup since the recording of their second album, out last year on Hardly Art. With the addition of Alice Sandahl’s vocals they are showing their full and mighty potential.

Point Juncture, WA had a tough act to follow. After the revelry created by The Pica Beats, Point Juncture, WA’s dreamy 90’s inspired rock felt complacent. Lead singer Amanda Spring had her drum set in the center of the stage and the guitarist, Wilson Vediner, alternately strummed and banged on the drums to fill in beats.

Theirs was a display of talent and teamwork. The songs were well crafted, but their melodious groove sometimes got stuck in a rut. The exception to this was “Viking Mission to Mars” off their new album Heart To Elk. The trumpet, played by the keyboardist, gave this song a climax that the others were lacking.

The moral of this on again, off again night of bands? Go see the Pica Beats as soon as you can.