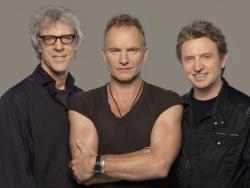 The Police Live at Key Arena

Yesterday I was more keyed up for a show – and arena concert, no less – than I’ve felt in a long time. I was going to see The Police on their first US date on their recently reunited tour. They hadn’t been to Seattle since 1983. This was very big.

The price of the tickets was astronomical (we paid over 60 bucks a pop – for the ‘cheap’ seats). And when we got inside, the merch table made me laugh: People scooped up t-shirts and posters galore, but it all looked like replicas from past tours. I think I could find those shirts at Hot Topic. The other funny thing about the timing of this tour is that fashion has cycled back to where it was when we last left The Police… leggings, off-the-shoulder shirts, and checkered Vans are all back en vogue. It’s only fitting that the trio would pick this time to reunite.

The energy at the Key Arena was palpable in anticipation. The venue banned beverages inside the actual arena, so everyone was paying seven bucks for beers and loitering in the cement corridors – which actually worked out well, as I bumped into a handful of people who otherwise I don’t think I’d have seen. Fiction Plane opened. Never heard of ‘em? No matter, you’ll soon understand why they got the honor when you read who’s their front man: a one Joe Sumner, aka Sting’s son. I only heard them through the walls as I was in the aforementioned corridor, but they sounded a bit like The Replacements. Not terrible.

The show started early, and The Police were ready to get on stage just a bit after 8.30. When the threesome walked out, the crowd erupted – and I can legitimately use that term for once. These people were psyched. The band started a little rocky, launching straight into “Message in A Bottle” with a few foibles, and next into “Synchronicity II” with a few more quirks. They seemed to find their own after that though, taking a few deep breaths and getting into the groove. From there, we were treated to two hours of a seemingly perfect setlist (all that was lacking from my perspective was “Canary in a Coalmine” and “Fallout”). But while all the songs were there, they were slowed down mucho and at least an octave lower in most cases.

The downtempo was especially obvious during the usually rousing “Truth Hits Everybody” – it was almost like the guys were playing through quicksand. And nearly every song concluded in an extended jam session, a tactic that’s cool at first, but teetered on indulging the band a bit too much toward the end. Andy Summers must’ve taken at least 15 solos too – the guy was ripping ‘em out. Stewart Copeland (admittedly my favorite living drummer) moved between his seated drumkit and a string of percussion instruments that he had to stand up to play – including a gong, a set of chimes, and bells. Sting, still walloping the now thrashed bass guitar that he’s had since The Police’s early days, dance-stepped around stage, his voice lower in pitch than before, but nonetheless stellar.

Highlights included the slowed down/purple-lit ‘Wrapped Around Your Finger,” replete with a video on the big screens of candles (reminiscent of that video, which I still precisely remember seeing for the first time). Also a treat was the groovy “The Bed’s Too Big Without You” and “So Lonely” – even though Sting didn’t hit those high harmonies, that song is still a favorite. At the start of the encore, we almost had a classic Sting vs Stewart Copeland tiff on our hands. Each was looking to the other to kickoff the song, both headstrong that the other was indeed the leader. When Sting finally walked to Stewart’s drum riser and physically pointed him to the wealth of percussion hanging next to his kit, it finally dawned on Copeland that he indeed was supposed to start “King of Pain” – and the look on his face (“Sting’s right! I hate it when Sting’s right!”): priceless. For all the tension in the past, though, the guys seemed generally relaxed and jovial.

Copeland’s dig at the band’s expense after their first Canadian tour date was widely circulated in the press, and I half-wondered if that was a true rant (Copeland’s cantankerous yet affable nature precedes him) or half publicity. In any case, in Seattle they smiled throughout the set, laughing at their own fobs (Sting hitting the wrong key at the closure of “Every Breath You Take,” Summers wincing at some of his guitar licks, Copeland chuckling at the above-mentioned gaffe). It’s good to see that stretch of time may have finally quelled some of those old explosions so that we didn’t witness an inferno on stage, but it's also good to see that the tension between the three still exists enough to make for some laughs – and brilliance.

Second encore:
Every Breath You Take
Next to You