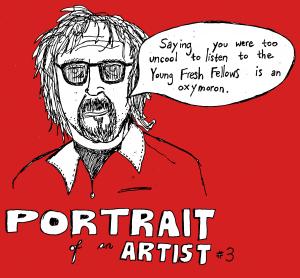 Portrait of an Artist: Scott McCaughey of the Young Fresh Fellows, the Minus 5, R.E.M., the Baseball Project, and more

I was too young/too uncool to listen to the Young Fresh Fellows, but I got way into the Minus Five after seeing them play with the Posies at the Mural Amphitheater, when I was in high school. “The Lonesome Death of Buck McCoy” was my first Minus Five CD purchase, from Tower Records by the Space Needle. Since then I have been a constant fan. Their style of mixing playful lyrics with real emotion behind them, has influenced me to write songs. To that I say….thank you Mr. McCaughey. I moved to Chicago in 2002, to teach middle school on the south side of the city as part of Teach for America. It was a rough go, but “Down With Wilco” was one of the few things (pizza, Wrigley Field, and Thai food….oh did I mention burritos?) got me through. I am on my third copy of that album, now on reissue LP.

D. Crane: Down With Wilco is a special record for me. I remember where I was when I heard “The Days of Wine and Booze” for the first time. I still buy it/recommend it to my friends. It is up there with the White album on my favorite albums of all time list. Do you have any special albums like that? Albums that you give to friends? Albums that you think are severely underrated/are as good as Beatles albums?

Scott McCaughey: Yes, I have albums like that. Whenever I’m asked, I go blank though. I try to turn people on to the Bill Fay CD of his first two albums, which coincidentally, Jeff Tweedy turned me onto the night before we went into the studio to start Down With Wilco. I also pass on copies of the first two McGuinness Flint albums — I stockpile them (at next to nothing, as no one wants them) and then pass them on to those I think might be susceptible to their charms. (John Wesley Harding took the bait and fell hard.) Nazz Nazz by the Nazz; Armchair Boogie by Michael Hurley; Wish You Were Here by Badfinger. Everyone knows Straight Up but WYWH is also a masterpiece! In The Air by the Handsome Family.  It’s tricky because you have to find stuff that people haven’t heard.  And in the end, no matter how great, nothing’s as good as the Beatles.  But all three Big Star albums come close.

I also really love the Gun album. What was the thought behind the “gun artwork?” I also love the rifle on the spine. It makes me feel uncomfortable to have it in my classroom, but don’t think it isn’t hidden beneath a grammar book! My favorite song is “Out There on the Maroon,” do you actually drink white Russians? Have you been to Russia?

I wanted the “Gun Album” artwork to be simple and stark. I wanted it to express the feeling that went behind the songs. That was my distillation of a couple tough years I went through. I HATE guns, but it was the central image that captured the feeling of the record. It’s thematic and whatever a gun represents to me felt right in presenting that album to the public. “Out There On The Maroon” took a strange road to its realization on the album. My friend Bob Spires from the amazing and wonderful band The Possibilities (and lately, Nutria) send me a drunken email with a “song/poem” that started with the line about the White Russians. I took it from there and somehow, over a few years gestation, with a few different attempts, it became a song to my daughter. A guilt-ridden song, but one that I hope evokes a bit of positivity into a rough situation. I’m not sure. I love the song. I haven’t had a White Russian for thirsty years, although occasionally people tell me I look like The Dude from The Big Lebowski. I love Jeff Bridges. I’ve been to Russia once, for about 18 hours. I have the furry hat to prove it.

Also, on that song, the guitar line is a musical highlight for me.  Seattle is dying to know….who can shred harder…you or Captain Peter Buck?

The fantastic JOHN RAMBERG (currently fronting Seattle’s Tripwires) played the nifty guitar leads on “Maroon”. You know, neither Peter nor I would ever claim (or aspire) to “shred”. Neither of us considers ourself a lead guitarist. Peter is actually REALLY good, and he could do it, but he doesn’t want to, thus one of the defining characteristics of R.E.M. as an original and unique and undated band.

I play in a band called BOAT, and I also teach middle school. I can’t see a point where music would provide for me, my wife, and dog/cats. I also think spending my days working with kids in a creative way, provides me with much more to pull from if I am making songs. I think if I just did music I would be bored…and make boring songs. And conversely if I just did teaching, I would be a bored/boring teacher. Do you work any other jobs when you are not playing music? Does working other jobs help make the music more interesting?

I used to work lots of jobs. Luckily I haven’t so much, since booking the Crocodile for a year 1993-1994. I’ve worked at Thrifty Rent-a-Car, a furniture factory (I got to be a pretty good sander), and of course many years in a record store. All of these jobs inspired songs, no doubt about it. Were they good songs? Hmmm, well, I still haven’t recorded “I Don’t Want To Live Without A Nose” — probably for the best.

Where do you write most of your songs? Do you start with chords, words, an image?

It varies but more often then not I start with words, because they come to me when I’m driving or walking (I walk more than drive), and hopefully I’ll remember them and jot them down at first opportunity. I’ve forgotten to jot down many of my best songs, which thusly remain unwritten. My best songs happen when I pick up an acoustic guitar or sit at the piano — might happen more often if I had a fucking piano — and start playing and the chords inspire a lyric and it all happens at once.  That’s the real serendipity of songwriting. Surprising how seldom it happens, mostly because I’m always somehow too busy to take the time to let that situation exist.

Man, that’s hard! I like playing “Circus Envy” though it doesn’t happen that often. “Horse To Water” is a big fave.  “Tongue” and “Kenneth”. For listening I like “Beach Ball” and “At My Most Beautiful” and “Summer Turns To High”.

If you had to put together a new band for the Minus Five, and could choose from any musicians living or dead….who would you choose? (Yes, you can choose Peter Buck.)

Irma Thomas on vocals. Peter Buck on 12-string guitar. Paul McCartney on bass. Allen Toussaint on piano. Jeff Tweedy on lead guitar and vocals. Steve Berlin on baritone sax and mellotron. I’m not sure my participation would be necessary at all! Except maybe driving the van (daytime only.)

What is the next project or project you are involved with?

Doing this incredibly fun Tired Pony thing. Me and Peter with Gary Lightbody of Snow Patrol, plus Richard Colburn from Belle & Sebastian, and Iain Archer, and Troy Stewart, and Garret “Jacknife” Lee. New album out now, and it’s amazing. Also hard at work finishing the next Baseball Project album and the next R.E.M. album!

{Don’t miss Scott with the Young Fresh Fellows at the Tractor July 23rd!}