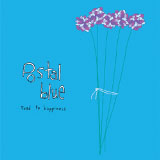 Brazilian band Postal Blue's fourth release, Road to Happiness, is a delightfully sweet tonic of bright, bubbly pop with an alt-country twist. The band is clearly influenced by The Smiths and The Cure, but Postal Blue is a distinct departure from your typical Britpop band.

The first song on the EP, "The World Doesn't Need You," is probably what Robert Smith would sound like if he picked up the harmonica and took a road trip through tumbleweed country. One weakness of the album is the lack of variation in the melodies: the second song, "It Won't Last," is so similar to the first song that I thought my iPod was on repeat mode. The band begins to show some versatility with "Vou Deixar Pra Depois," which shifts to a gauzier sound. "I’m Glad You Know" is the most distinct song on the album: Postal Blue sheds the alt-country vibe, and André Costa’s delicate drumming combines with Adriano Ribeiro’s keyboards and understated vocals to form a beautiful pop lullaby.

Although Postal Blue maintains a narrow range of melodies and vocals, Ribeiro’s ability to capture sadness without drowning in melancholy and the peppy pop instrumentation provide a pleasant pick-me-up that will send your blues away.