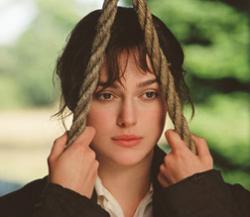 Director Joe Wright took at least a medium-sized risk tackling the latest big screen version of Jane Austen's Pride and Prejudice. Not only is it considered pretty niche — catering principally to the Female of the species — its niche is also a quietly rabid variety of fan. Many people, including me, consider the 1995 version starring (swoon) Jennifer Ehle and (double swoon) Colin Firth to be the first and last word in Pride and Prejudice interpretations. We're protective of our book and of our beautiful existing filmed version. Pride and Prejudice in 127 minutes? Madness!

But no, no madness. It's flawed, but it's fine. It is, of course, noticeably abridged, and screenwriter Deborah Moggach took unnecessary liberties with the text (why mess with a perfect source?), but she tried admirably to stay faithful to the lovely, funny spirit of the book, and in the end it succeeds well enough.

The story's pretty simple. Will our heroine Elizabeth Bennett, second eldest daughter in a family of five girls, find true love so she needn't marry for security? Will the haughty Mr. Darcy ever repent of his judgmental ways? And, hmm, is there a connection between these two questions? A surprising number of twists are required to get us to the inevitable resolution, including two Wrong Guys, a second love story involving Elizabeth's eldest sister, and the wacky hijinks, 19th-century-style, of Elizabeth's flighty youngest sister, not to mention Mr. Darcy's slow evolution. This film manages to squeeze all of that into a terribly conservative two hours without feeling forced or rushed. On the contrary, it even occasionally drags (note to Donald Sutherland: pick up the pace!).

Elizabeth Bennett is played by Keira Knightley, formerly an erstwhile damsel in pirate distress and punk bounty hunter. This is really her movie. Whenever she's on screen it feels as if Wright set her loose and got out of her way. It's fun to see Lizzie played by someone roughly the correct age, and Knightley plays her with a lot of wit and spunk. The camera loves her and she loves the camera. Most of the rest of the cast is also terrific, especially Brenda Blethyn, as the excitable, self-absorbed Mrs. Bennett, and Tom Hollander as the hapless, hopelessly oblivious Mr. Collins, whom he plays with a wonderfully subtle note of pathos. And Dame Judi Dench… man, it's like impossible not to be hyperbolic about her. She is so good.

Happily, Wright has a great feel for Austen's often underestimated wit. He includes funny little touches that let the characters' personalities shine just a bit more than you'd expect in a film that has so much territory to cover in so little time. In one scene, after having had an unexpectedly lovely day, Elizabeth receives a letter which relays devastating news. She comes to break the news to her aunt and uncle, with whom she's traveling, but she realizes too late that she's too overcome with emotion to be decorous, so she laps the room and walks right back out. She then returns a split second later, a model of propriety. It's a throwaway gag that Knightley sells beautifully. In another, during a line dance, Elizabeth is involved in three separate conversations simultaneously that each get about a half a phrase per turn through the dance.

But the movie is, as I said, flawed. First, I know the filmmakers felt they needed a hook to get all us crazy modern girls into the theater, but I think they made the whole thing too, well, modern. Elizabeth was famously ahead of her time, it's true, but I think it'd be a stretch to call her character, say, sassy, which is how the film occasionally casts her. Sometimes even I thought she needed to keep her mouth shut. And bangs? I'm no historian, but I don't believe bangs were exactly de rigeur in 1814. But most egregious is The Case of the Missing Darcy. Matthew MacFayden, who plays Darcy, is smoldering in his scenes with Knightley, I'll grant. And he looks smokin' crossing a misty field at sunrise. But in just about every other situation, he's a big ol' drip. If you've never read or seen Pride and Prejudice before I don't see how you could generate any interest in this taciturn and slightly dorky Darcy fellow. In the book, we see right away that for all his unpleasantness and snobbery, he's also alluringly discerning, and scrupulously, ravishingly honest, especially given the repressed environment. His suitability as a mate for our marvelous Elizabeth emerges slowly, to be sure, but there's an initial spark of something exceptional. Not here. If Wright had tried on purpose to perpetuate the stereotype that men are irrelevant in costume pictures he could hardly have done better.

However. It's still a glorious story, and my friend and I both swooned at the end, so it can't have failed too miserably, now can it.