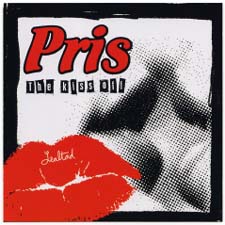 This release from Seattleites Pris claims to be a collection of demos written and recorded by frontman/guitarist Burke Thomas in his various basements over the span of five years. The collection — if indeed it really is of demos — is superb. Most diehard fans of this high-energy pop rock band no doubt will know most of the material already, from previously released material and live gigs. But to have them all on one CD — remastered, even — is a must for enjoyable, extended play.

The band has a penchant for solos of both the guitar and keys variety. Thomas (you may recognize his name as that of the sub drummer for Loveless labelmates Vendetta Red) is a dynamo behind all things instrumental, and his vocals are a natural fit for sing-along choruses. Pris exhibits the standard pop-punk influences: a touch of rawk, a dab of new wave, and a heavy spoonful of sugar-pop melody and harmony (plus a few of the obscure and absurd: I swear I could even hear a favorite childhood toy, Speak & Spell, in there). The slick production only enhances the ditties. The Kiss Off is full of sheen, but not so glossy that it should be filed under "Generic Pop Rock Band of the Moment." Lovers of Weezer will particularly enjoy the harmonies, heavy guitars, and smart layering of lyrics.

igStella secret: I usually reserve at least one spot on my friendster 'favorite music' list for a local band. It likely will be next filled by Pris.