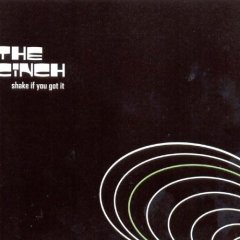 Shake If You've Got It

A tasty Northwest punk rock cocktail of a band, the Cinch nicely combine strength and tartness with a smidge of sweetness. With their second release coming out on Dirtnap Records, (their first was an EP recorded after the band won studio time in a competition), the Cinch invite you for a taste with a full-length treat called Shake If You Got It.

Front-women Jennifer Smyth and Kathy Dubé share vocal duties. On first listen, they sound like a cross between early-90s Breeders and Lush's Gala-era vocal stylings — only like, two octaves lower! One voice meanders between talking and raw alto singing; the other complements, nicely uneven, higher in range and harmonious. The blend doesn't overwhelm the raucous and often driving rhythms best heard on the standout track "Forwards & Backwards."

At times, the musicians offer their influences openly, emulating the likes of Joy Division and the Velvet Underground. But that's okay, because this ten-song offering is coarse, hooky, and most worthy of a Dirtnap roster position. Coming to a record store near you on July 13th, or get a preview on their mp3 download page.