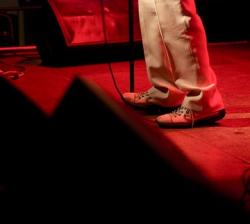 On the heels of imaginary kiku's interview, I've got to concur that Project Jenny, Project Jan was by far the best band on the bill this past Saturday at Neumo's. Don't get me wrong, now — Fujiya & Miyagi did what they do, headlining the show, feeding a packed house with a crazy set of crowd pleasers. And our friends Pop Levi owned the stage in second slot, a little more electric guitar rock-band-y than most people were expecting (especially on the heels of Dita Dimone as an introduction to their sound and style) but with a commanding performance nonetheless.

But these two PJPJ guys… seriously. I didn't get to Neumo's until almost 9:30, and the house was pretty sparse. Maybe a dozen or so people on the floor, with most of the crowd arrived in the top bar or over at Moe's. And as I started to scope out the stage setup, I couldn't help but overhear a girl by the bathrooms geeking out about Project Jenny, Project Jan. That, along with the six uber-enthusiastic fans that had solidified their spots in front of the stage, tipped me off enough to make sure I paid attention to this band. And from the instant they took the stage, I couldn't not pay attention. They were fan-fucking-tastic.

Frontman Jeremy Haines had moves that would straight-up put Elvis himself to shame, with the stage presence of Brandon Flowers and big slab of Park Slope on the side (and I mean that entire sentence as a compliment). Delivering whip-smart lyrics with impeccable timing, Haines danced across the stage effortlessly, complimented by a perfect stream of images projected onto the back curtains for the duration of the performance.

And the other half of PJ,PJ – Sammy Rubin – provided the soundtrack, heavy laden with dance beats and equally smart composition. The last thing I expected, with the empty house fifteen minutes prior, was for the floor to fill up about halfway with a bunch of trendsters. Dancing. Reluctantly at first, but dancing nonetheless. It never ceases to amaze me when people take their hands out of their pockets at shows here.

As I was writing in my head about PJ, PJ while I got my own bop on, scenes from this video immediately came to mind as a way to get you there, should my words not suffice:

Only faster. And better. And more badass. And without the treadmills.

PS: PJ, PJ really is all that and a big bag of rad dance moves, because I got to express some thanks over at the merch booth and Haines was receptive, engaging, and grateful. His interactions with fans in the crowd between sets were nothing short of friendly and enthusiastic, in case anyone happens to say otherwise and is ready to go all Thunderdome on them or something.

The rest of the show went off well, with Pop Levi assaulting the now-crowded floor with full-volume guitar debauchery (and a bass amp the size of a refrigerator, which I initially thought was a Leslie) and some quasi self-indulgent, albeit talented, stagework. Fujiya & Miyagi capped off the party as my backup battery ran out of gas, and pulled out all the stops with PJ, PJ for a smashing encore.

{Still dancing? Stop by and get your bop on in the flickr pool!}