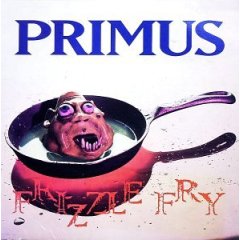 Primus was my first introduction to the alternative-era bands in high school. Sure, I'd grown up listening to a swath of new wave and punk albums (cassettes, at that point), but they were all bands whose roots stretched far, far back into my childhood. Many were bands that, even in the early '90s, were over the hill, long broken up or established big-timers: The Cure, The Dead Milkmen, Depeche Mode, The Clash, Sonic Youth.

Primus was different. Instead of being one of those acts of whom I heard secondhand, mostly from the big kids letting me borrow and dub their favorite cassettes, they existed in the here and now. "Primus Sucks" stickers popped up here and there in the school parking lot. The skaters and whatever vestigial wavers who were still around were talking about this crazy band with wild bass lines and lyrics that were like the Milkmen's humor filled to the gills with psychedelics. Needless to say, I had to check it out. Thanks to one of those 12-CDs-for-a-penny offers that used to turn up everywhere teenagers might find themselves, I did.

I got my hands on Sailing the Seas of Cheese, and suddenly realized that there was a world of new bands out there. Bands I barely knew about. Bands I didn't even know of yet. It was a minor step in my introduction to independent music — the bane was on a major even in those days, after all — but one that, 16 years later still stands out.

I got Frizzle Fry shortly thereafter. Although I rarely pull out the Primus albums — I can't really stand anything after Pork Soda to be honest with you — old gems like "Pudding Time" still make my day when they pop up in shuffle mode. "Pudding Time" is, for all intents and purposes, a standard early-years Primus song. Less Claypool's finger-popped bass is everywhere in the mix, though guitars still bring hard rock and punk sounds to the table; Claypool's vocals are odd but relatively straightforward, a skewed take on spoiled rich kids that's really just an excuse to let the band jam out.

I came across Primus about the same time as I heard Nirvana for the first time. I incorrectly assumed Nirvana was an old-school punk act. To me, Primus' first couple albums are as much a reminder of the days when the budding alternative boom was still on the horizon, a time when new bands were exciting, weird and, for a few short months, still far from the clutches of the mainstream.