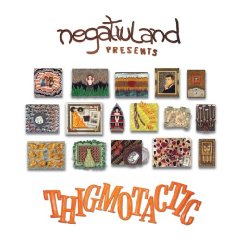 Negativland has a huge backstory as post-situationist pranksters and pop culture satirists and sound collage mayhem-makers that I'm going to skip for the most part. I will say that their essential mid-80s album Escape From Noise is still one of the funniest, freshest, and even funkiest uses of soundscape to form a politically-pointed accidental novel. Their attacks on Pepsi and U2 shouldn't go without mention either, in their never-ending Def On The Installment Plan.

The truly underground art collective set out in 1980 in the tape underground to mostly-anonymously take at least a segment of the rock subculture back to the blurred apocalypse of the counter-culture, beyond where William Burroughs had recommended in literature with "Naked Lunch"; sounding more like combining the experimental pop theatre of the Residents with the classical obfuscations of Varese, topped off with what Sirhan Sirhan had done with automatic writing. Cassette after cassette, album after album, CD after CD, it all seems a little dangerous, a little creepy, and maybe even illegal. If Adbusters had this band's visceral energy, people might actually give a damn what they read in a magazine.

Thigmotactic, a root word from the Greek having to do with touch, is all about reality thinning to reveal the dark life beneath society's surface. It plays with the magic energy of flesh itself, and the forces that kill and procreate with it. Thigmotactic is supposedly the band's attempt at some form of pop-song album, and fans of They Might Be Giants' earlier, more surreal moments can find great songs here like the perhaps-openly romantic "Extra Sharp Pencils" (a SWEET Negativland song? Can it be?) or the manic Beat stomp of "Jack Pastrami."

Speaking of meat, Negativland does that a lot on Thigmotactic, and that may be one of the main reasons for its catchy but subversive existence. I mean, related to the consumption of other living beings is also the question of how do we justify drinking milk from cows when it, and everything, has to be brought to us "By Truck"? Did you realize everything is pretty much brought to you by truck? I hadn't thought about it before, but it explains why we're in a war for oil and why the environment is furiously eroding around (and inside) us. This practical realization of dependency on limited and exploited resources is playfully delivered in snappy, short, hypnotic pop songs, and as something nears being preachy or a little corny, a snaky keyboard rhythm and scraping guitar draws you back into the merry jingle-jungle miasma.

Thigmotactic jostles and jimmies between Rugburns-style parody rock, and Mothers of Invention sing-alongs, Ralph Records' weirdnesses, and yet it remains an original musical statement no matter how unnatural or uncanny the imagery of the songs are. And it all gets pretty creepy pretty quickly, so an attempt at keeping you there for seventeen songs is the kind of psychotic genius thought-revolutionary guys like the French Symbolists would certainly reward the band for.