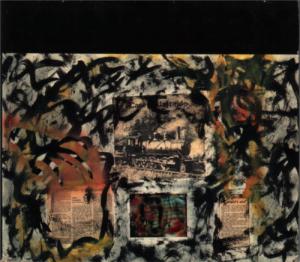 If you want to start your day as disturbingly as possible — and I know you do — well, then do I have a song for you. A b-side (point of order: can they be called "b-sides" anymore considering most every music media has 0 to 1 sides?) to Ministry's "Just One Fix" single (from the excellent Psalm 69: The Way to Succeed or the Way to Suck Eggs album, which was always referred to by my friends as Keoanahoog based on a phonetic pronounication of whatever language the album title was written on the spine), "Quick Fix" isn't as much a remix as an entirely new song.

And this new song is about aliens invading Earth … as told from the perspective of the aliens … one of which is William S. Burroughs. Yes, the man himself.

It isn't his oddest cameo — that might be his appearance in U2's "Last Night on Earth" video — but it is odd. You get this slow, sort of industrial beat, sort of tribal beat and then Burroughs mumbling lyrics over the music, lyrics like Earth has a lot of things other folks might want, like the whole planet. He goes on to describe that maybe the aliens want more CO2 in the atmosphere, you know, to make things more comfortable for them. After admitting he is, in fact, one of the invaders, he says that he disagrees with some of his comrades who want to just nuke the whole planet and sums it up with "If we can't think up anything quieter and tidier than that … we aren't all that much better than you Earth apes."