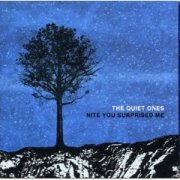 Nite You Surprised Me

Listening to the newest release by cross-country vagabonds The Quiet Ones, I found myself staring out the window watching the wind stir the trees with restless anxiety, and imagining scenes of the past and future as if they were short film clips gathered in a montage and set to. . . well, The Quiet Ones.

The music on this six-track EP is gorgeous. While many bands who categorize themselves as "indie" would be satisfied with five instruments layered in logical "this is how the band sounds in our basement" structure, the Quiet Ones believe that more is more, when done right — and they do it right. The sonic palette, the layering combinations, the overall production aesthetic: it's all crafted with nuance and grace, and deeply enjoyable to hear.

The main reason for the sound of Nite You Surpised Me may be how it was made. The band, comprised of the three Totten brothers (John, Chris, and David) and close friend Ryan Dixon, spent over a year sending tracks back and forth across the country, trading with Boston-based producer Neely, as the brothers relocated the band from restlessness-inducing Tennessee, to Missoula, and then Seattle. These tracks speak, via their calculated, zipper-tight layers, of that distance, of the necessary time infused into such a process, and of course of the wonders of today's digital home recording tools. It's a process that just can't happen if a band is sitting in the basement getting tunes ready for the next gig.

Every space on the Quiet Ones EP is filled, including the preludes and epilogues of songs. Children at play, ethereal synths, and strings blend from one track to another. Ground-breaking? No, pretty standard for the midi-and-multi-tracking adept. Executed successfully? Absolutely. And yet for all these layers of orchestral nuance — hell, there's a harp in the first twenty seconds of the lead track, "The Girl With the Dark Hair" — it never feels overdone. Te group keeps the chord structures simple and the song forms straightforward.

And yet, another reason the album doesn't ever feel like it's too much lies in the main vocal melodies. For all the paints on The Quiet Ones' palette, something is missing that keeps these songs from grabbing you, from affecting you, from transforming that pensive moment staring out the window that the arrangements inspire. The band's melodies are as precise as their instrumentation; there's almost a Stereolab quality to the delivery of the verses on "The Girl With the Dark Hair." The lyrics are distant as well, with a vagueness to them. There's nothing discordant here; the melodies and lyrics fit the music without a doubt, and yet, the melodies aren't urgent enough to distract from your own thoughts, and what's being sung on these songs is not going to cause you to reconsider your window daydream perspective.

The result is that the best track on Nite You Surprised Me is the instrumental: "Se De´Fausser A` Cœur," which transports you to an elegant ballroom circa 1938, complete with either a formal gown or an officer's uniform. The strings and the bells: it's dreamy. And no sooner have you sauntered the floor and spotted the object of your time-traveling affection, the one that got away long ago, then a sneaky electric guitar nudges in, grabs the curtain, and transports you to a hip patio luau some thirty years later, complete with bongos, lit swimming pool, open collars and perhaps a whiff of espionage. With the exception of some Star Trek quality vocal brush strokes, there's no vocal on this track, and we don't mind.

The place where the band comes closest to meeting their arranging flair halfway with a really affecting vocal melody is in the very next track, "I Don't Know Why." The song begins with a grand, Pet Sounds-y opening. Then everything drops away except for banjo and a vocal with a Flaming Lips affectation. The drums sneak in, and by the time we hear the simple refrain: "And I don't know why," well, you don't know why either, in the good way. It's the kind of moment that makes you reconsider the happy daydream, a pop treasure. A late verse about abandoned halls and floors covered and left behind, set to tambourine and bells, brings the song out of a triumphant bridge and into a dreamy, there-goes-the-spaceship-into-the-arizona-night moment of whimsy that works so well you smile out the window.