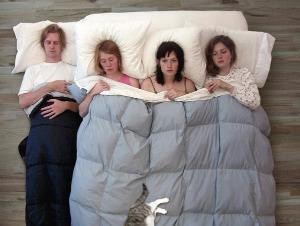 I first came across Palomar a long time ago. I first heard the band's demos while working at my college paper in Virginia. I'd spend late evenings my freshman year digging through the drawer where measly assistants were not allowed, looking for promotional items I could steal. Palomar's first disc was one of these—no cover, in one of those slim jewel cases. Took it home, enjoyed it, wrote a paper on Joyce. Thus ended the relationship.

Some years later and I imaginarily moved to New York and came across Palomar on a bill in Brooklyn. I remembered the rocking good time had while writing that Joyce paper, so I went, enjoyed, and bought a record.

Palomar's blend of popular and not-as-popular rock balances them perfectly on the picket fence between "way cool" and "too cool." Witty, attitudinal narratives juxtapose oh-so-sweet female harmonies, harkening back to the days when Rilo Kiley wasn't just "Jenny Lewis' other band." (I actually overheard this at an Okkervil River show).

Palomar's new record, All Things, Forests drops just after SXSW (3/20 to be exact), and like every other band in America they'll be in Austin the week before. But like only the most imaginary bands in America, they'll be playing a Three Imaginary Girls-sponsored showcase on Thursday March 15, 5 pm with, among others, Manhattan Love Suicides, Tullycraft, and BOAT. Oh, and there's free beer, and it's a free show.

TIG caught up with lead singer Rachel Warren this week via email—during a really boring work presentation, to be exact—to ask a few questions about Austin, the TIG-sponsored show (which is free) and the beer (which is also free).

What's the thought going into SXSW? Is it overwhelming for a band to travel down to Austin and be part of basically the longest and biggest club bill of the year?

It is overwhelming, but the festival isn't as big as it seems. It's just that every band that plays SXSW plays ten times while they're down there. This is bad because people have less time to relax and visit with friends they only see on the road, but it's good because you end up being able to see all the bands you want to, cause they play so many times.

Ever gone to SXSW while not being in a band?

Who do you plan on catching while you're down there? Any particular shows you don't want to miss?

We'll probably see mostly friend's bands — the others we can see when they come through New York!! So we'll see The Octopus Project, Palaxy Tracks, The Big Sleep, but then we'll probably also go see the Mountain Goats, Mary Timony, The Bravery, Les Savy Fav, and Sound Team, and Spoon. It's a weird mix of people who are genuinely great and not to be missed, and some guilty pleasures thrown in there… the Bravery has some darned catchy songs!

There's an oil paiting portait of George W. Bush in the capitol building down there, in the rotunda, along with a lot of other oil paintings of different Texan governors. Let's pretend Stubb's BBQ has moved and is now grilling and giving shows in the rotunda. Who is your dream bill to see there, surrounded by Texan government greatness?

I guess I would see a bill made up of bands inspired by Bush in all his finery! Presidents of the United States of America, Bush, American Princes, and Lower Life Form.

Five months isn't that long!! How about the new Oxford Collapse album, the new Shins, the new Decembrists, the new Ted Leo, and the Dean and Britta stuff.

The ideal website would be edible and have a melted cheese topping.

Any new songs we should look forward to at the show down there? New instruments?

Yes! Lots of new songs from our new album. And yes to the new instruments — -Brockett and I both play the egg now. It's harder than it looks.