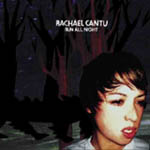 Rachael Cantu's debut album Run All Night is a very promising entry into the indie world. While a little scattershot and uneven at times, Cantu's voice can captivate the listener and draw them into her songs. That quality makes Run All Night a worthy listen, and hopefully is the beginning of a career that will solidify with time and experience.

Cantu recently relocated to southern California from Boston (note to Rachael and to Casey Dienel: why are all you ladies leaving Boston? Is it something we said?), but her album is still permeated with a very Boston sound that descends from the likes of Kristin Hersh and Tanya Donelly. She's worked with some heavy hitters in the indie world, including Tony Goddess of the late Papas Fritas, Tegan from Tegan and Sara, and Jason Gnewikow of the late Promise Ring (the former two appear on Run All Night.) The record is filled with quiet melodies, strummed guitars, and heartfelt vocals that create a melancholy mood that saturates the album.

"Hear My Laughter" starts with a guitar and vocal combination that would sound at home on Kristin Hersh's Hips & Makers, stripped bare for the listener before the ominous keyboard line comes in as Cantu croons "If it's a fight you're looking for/if it's a fight/I've got my fist to my face/and I'll hit first." This tone is continued on "Sweat & Bones," a song that seethes with animosity for a person that wronged the main character somehow.

Cantu's strength seems to lie in keeping her vocals sparse, and tracks like "Blood Laughs" and "This Breath Won't Hold" demonstrate this. "This Breath Won't Hold" has a bittersweet feel with Cantu singing "Until you that you love me/until you say that you need me" repeatedly. "Your First War" is probably the most fully developed song on Run All Night, with a strong Tanya Donelly influence. Strong interplay between the cello, guitar, and drums, along with Cantu's voice, make it the best indicator to what her career might hold. The Tom Waits-esque closing title track sounds like the late night smoldering siren song for the brokenhearted. Sometimes, the songs have a little too much of a pop feeling, such as "Saturday," which sounds like a song that got lost on its way to a Dawson's Creek episode.

Run All Night is a dark but entrancing album that showcases a promising new talent. Rachael Cantu obviously has the voice and songwriting skills to make a name for herself in the packed indie singer/songwriter scene if she can keep this up.