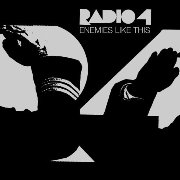 Being the Pacific Northwest, I'm sure many of our loyal readers here at Three Imaginary Girls are fans or, or at least consumers of, tofu. That typically square, white and mostly lifeless blob of soy product really can't exist on it's own. I mean, how many people do you know that say "hey, I'm going to sit down and have some tofu – straight up!" If they do say things like that they're likely either (a) crazy or (b) drunk. The thing with tofu is that whatever you put it in, it soaks up that flavor like a flavor-soaking sponge. Stir-fry! Fake cheesecake! Swimming Rama! BBQ sandwich! Anything! Tofu just takes on the shape and flavor of its immediate environment. What, you ask, does this have to do with indie music? Well, Radio 4 is musical tofu. For the best of my knowledge, they have no form of their own, but they can take on pretty much the sound of their immediate musical surroundings. It's hard to define the band because they just pretty much sound like someone else all the time, but their new album Enemies Like This is still fun to listen to, but it might make you feel hungry pretty quickly afterwards.

The album opens with a lot of promise, with quick drumming and a screeching guitar like that takes equal parts Killers and Bloc Party, but the title track really goes nowhere beyond that point. Sure, the song is catchy enough and I know I'll be listening to it more than I'd admit to the average passer-by, but it really doesn't leave a distinct impression of its own. They do capture some of the frantic energy of early Radio 4 songs like "Dance to the Underground", especially on "Too Much to Ask For" and "This is Not a Test", which both mix slashing guitars and thumping beat that is supplemented with, well, bongos. The undeniable energy makes the songs a lot of fun, albeit not entirely original fun. This is where Radio 4 knows what it is doing: putting together songs that are abounding in energy that may or may not have any real substance, something like !!! without the eight-minute-plus run times. The best example of the band reaching into its strengths and weaknesses simultaneously might be the closing song, "As Far As the Eye Can See," that transports Radio 4 back to their roots in dance-rock, full of handclaps and drumming. It surely a lot of fun, but doesn't make you feel like they're trying to do anything particularly daring.

Otherwise, Enemies Like This seems to spend a lot of time trying to be other bands. "Grass is Greener" and "(Always a) Target" are U2 circa The Unforgettable Fire, "Everything's In Question" is either middle Clash or possibly even Rancid-lite, "Ascension Street" is some odd Bob Marley/reggae disaster. Other than "Ascension Street," a song that defies logic in such a way as attempting to comprehend things like Madonna a serious actress or the genius of the Bush Administration, Radio 4 really don't do a bad job with the musical mimicry (or would they call it tribute?) but again, the music seems to just capture the flavor rather that the substance.

Overall, Enemies Like This (anyway, shouldn't it be "Enemies Like These"?) is more rock oriented than their last album, Stealing of the Nation. Whether this is good or not, it's hard to tell. The songs lack the depth to make them very unforgettable or want to call your friends to tell you about them. They're pleasant enough, like that Tofu Scramble that was good, but nothing that makes you want to eat it 24/7. What can be said is that Radio 4 can make you want to dance, and maybe that's enough for them.