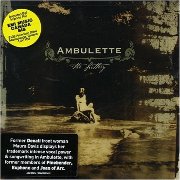 Two words: Maura Davis. A name, actually. Davis and her brother Keely launched Denali, a morose and tangled band with Maura — the archangel-voiced female lead singer — giving nightly clinics on how one woman's powerful voice can be capable of making any faux-hawked indie-cynic swoon.

Then the group disbanded after Keely's side-project, Engine Down, started to take off.

And fans wept. Engine Down played a different type of music — the departure of Denali left a bitter taste of absence.

Maura moved to Chicago and started a new group. Christened Bella Lea, she essentially started over, only the biggest Denali fans still tracking her musical exploits via the world wide web (a handy tool you readers may have heard of). After playing a few shows, garnering comparisons to Radiohead's Bends era — comparisons which, believe it or not, were actually deserved — Bella Lea ended up changing their name to Ambulette, following law/confusion/common-sense debate with another band, Bella Fea. In the end, it was Ambulette, not Bella Lea (or Bella Fea, for that matter) who signed a contract with Astralwerks (owned, coincidentally, by Capitol Records, who released The Bends way back in '95).

And thus Ambulette was born. On their debut EP, The Lottery, Ambulette, unlike Denali, relies entirely on the ivory shoulders of Maura Davis. Her voice carries power and decibels to new levels, all the while lying at the surface of the sonic mix. Davis takes control of the five songs, thick and layered with Jesus and Mary Chain-meets-Tool influences, and she succeeds at being one of the very few vocalists who could effectively carry such a burden.

The downside, however, becomes painfully obvious after track four: Maura, for all the beauty of her voice, doesn't change it that often.

The Lottery burst forth on first track "I've Got More" with energy, vitality, dynamism, and above all, an amazing vocalist. However, the title lies: there is nothing more. The energy and dynamics in the first track do not get better. Granted, "I've Got More" draws you in and captures you, so much that you will think this will be the best record you've heard this year, until the EP has played through its five tracks and has started all over again. "Wait," you'll think. "Did I have the stereo on ‘repeat'? There was piano in there for a bit, but maybe that was all the same song…"

Ambulette plays at full throttle at all times. Limiting their sonic dynamics, tracks build at the beginning and follow a pretty basic pattern. Only "If You Go Away" extends the building crescendo that typifies this record (and it results in an unnecessarily seven-minute plus track).

Fans of Denali will and should check out Ambulette for a trip down memory road. However, be wary that you'll probably be tired of the EP by the second listen. People who don't know Denali should pick up either of their two releases before reaching for Ambulette, for despite the different sensibilities — Denali's sound is much more keyboard-based and toned down — Denali will be beautiful in a memorable way, not unmemorable way, as Ambulette regrettably stands.