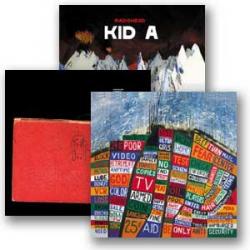 Andrew Bartlett September 20, 2009 no Comments
Kid A (Deluxe Edition)
Amnesiac (Deluxe Edition)
Hail to the Thief (Deluxe Edition)
In a career arc, Radiohead was quickly more art-rock than standard alt-rock fare – moving from “Creep” to “Fake Plastic Trees” and then OK Computer and “Karma Police” in four years. Three guitars, cryptic atmospherics, difficult lyrics: These things and more took the band to critical and increasingly commercial heights. Then they came back with Kid A and its icy opener, “Everything in its Right Place” and, eventually, Thom Yorke’s plaintive “I’m not here/This isn’t happening.” Radiohead seemed beyond the pale, skittery and twitchy, and then came Amnesiac, which went far enough afield into the nervy fray that they “came back” with Hail to the Thief, purportedly a return to guitar-rock form. And that’s the setting for today’s story, the re-release of the triumvirate of releases that ran to the band’s outer edges and returned them to the thumpy guitar/drums forward tilt of “2+2=5” and its brethren on Hail to the Thief.
But if that’s all there were in the Deluxe Editions, no one would bother. So let’s do the numbers: On Kid A there are 13 unreleased live cuts; Amnesiac brings another 6 live tracks, 5 of them unissued, as well as 8 coveted B-sides; and Hail has a mixed bag of remixes, a couple live tracks, and some B-sides. Of it all, the Canal Studios live tracks, 7 on Kid A and 5 on Amnesiac, are the highlights. The ecstatic crowd is a huge presence, as is a full scale of production values – the latter missing from the BBC tracks on Kid A – and still yet, you can almost hear Thom Yorke’s flailing physique on “Idioteque,” a toil of a tune, with just voice and beats. You can’t discount the value of the B-sides from Amnesiac, here claustrophobic and needled by guitars (“Fast-Track”) and there uncannily Can-like (“Kinetic”) and then frantically drum-and-guitar rich with a thinly-sneering  Yorke fronting a rising squall. Finally Hail has the Yorke-alone pair, “Fog (Again)” and “Gagging Order,” the first with downward-rolling piano and the peripatetic singer earnestly dystopic and the second almost down-home pared to just acoustic guitar and voice. Radiant and chilling at once: That’s the Radiohead charm, and it’s here in abundance, from the gatefold packages to the squiggliest smudge of guitar tweaked by the electro-aura the band rolls out across this trio of two-fers.