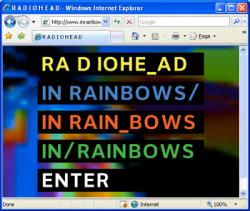 With the amount of text burned over the past few weeks on Radiohead latest album, its unconventional and industry-busting release method and the general fervor over the first new Radiohead songs in four years, you’d think Thom and the boys had just single-handedly talked Iran out of nukes, made the Israeli and Palestinians become buddies, taught Britney to be a perfect mother and re-balanced the Earth’s carbon budget. Of course, they haven’t done any of those things, but they have attempted to turn the music industry on end, releasing In Rainbows all by their lonesome as a digital download (with a physical release down the pike) where you name your own price (Shatner be damned), giving all the power to the band and fans rather than Big Corporate Monsters. Whether this release permanently changes anything is yet to be seen, but for a band that is vanguard for the current world of modern rock, releasing an album that will not appear on the US or UK charts is quite a leap of faith that this new release methodology works, and if it does, look for the major labels to try to sue everyone in sight to keep their revenue streams open as more bands try to break free.

However, business models be damned! The real reason people are excited is that people love Radiohead. They’re as close to a true career band as comes along anymore and they’re paving their way to Rock and Roll Valhalla. The question becomes, beyond the secretive and groundbreaking method of release, is In Rainbows any good? The answer is a resounding “yes”. Is it the best Radiohead album ever? “Probably not”. It is, however, one of their better discs in a while where the band seems to have traded in the gloom and doom of Hail to the Thief for a brighter outlook on life, and with the frenzy stirred up by their fans over this release, who can blame them?

In Rainbows has no official album cover I can figure out, however it does have a specific sequencing, at least according to the file names of the download. “15 Steps” opens the album and begins with sounds more reminiscent of Thom Yorke’s solo disc, Eraser, however after the distorted beats and Yorke’s falsetto vocals have brought us in, we’re greeted by Johnny Greenwood’s surprisingly happy and uplifting guitar line – it is remarkable how much it changes the character of the song, creating a dreamlike mood to the song. It is undeniably Radiohead, but also undeniably upbeat. However, it seems like many of us have been first drawn to “Nude,” a drifting song in the same vain as “Subterranean Homesick Alien” or “Exit Music (for a Film)”. The song is beautiful, with Yorke’s vocals and Greenwood’s guitars wrapped around each other like a vine to a tree, “Nude” might be one of Radiohead’s finest songs to date, it is a testament to the band and their music. Another high point has to be “All I Need,” a darker, more somber number that seems to have affinities to tracks from Amnesiacs or Kid A, with its thick and syrupy synthesizer. Yorke’s vocals stay below the stratosphere and mix in with the ominous tones, creating melancholy love song of the highest order.

If anything, In Rainbows exhibits the diversity of Radiohead’s sound. “Faust Arp” is a quieter and more stripped down (minus the string arrangement), coming across as a slighter more optimistic version of “Street Spirit (Fade Out)”. It displays a side of Radiohead we haven’t seen in many years, as a straightforward rock band. The same might be said for “Bodysnatchers,” which is about as straight a rock song as the band as recorded in years, but unfortunately just doesn’t stand up to the rest of the music on the album.

Other turns the band takes in “Weird Fishes/Arpeggio,” a song that continues the trend of optimistic and uplifting Radiohead songs, it could almost be considered as close as Radiohead has ever been to becoming R.E.M. or U2 (sorry if that just offended anyone). “Jigsaw Falling Into Place” starts off like a restrained Hail to the Thief’s “2+2=5,” rapidly morphing into a swiftly moving song that has few brothers in the Radiohead oeuvre, instead talking the band into a more raw and unproduced sound that is refreshing, right down to the pure guitar work and controlled vocals from Thom Yorke. The closing song, “Videotape” is more what we’ve come to expect from the band, a plaintive, somber track that starts with hollow piano and Yorke’s vocals slowly get invaded by a collage of sound that brings the album to a close. I have to admit, this is far from a well-aged view of In Rainbows.

Just like the rest of the world, I’ve had about 20 hours now (as of writing) to absorb and digest the album. I can say this much about In Rainbows: it is good, probably very good, probably very very good. How it will sit in the pantheon of Radiohead albums is hard to tell at this point, but on my gut reaction right now, it is in the upper half, lower than OK Computer or Amnesiac, higher than Hail to the Thief. This album might be one of the most challenging discs the band has released, even without considering their novel release approach, as it incorporates the band’s penchant for genre-bending noise and a newfound love for restrained rock compositions. Wherever it ends up falling, In Rainbows will be a milestone in the history of rock music, both for its business model and its position in the Radiohead discography.