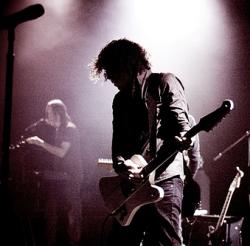 Today's KEXP members-only Film School show was just one more reason why we are truly blessed to have such an amazing station in our town. The LA-based band credited KEXP for discovering them and repeatedly thanked them for their continued support and airplay.

The band took the stage for an intimate afternoon of atmospheric rock and roll at the always swanky and enjoyable Triple Door. The eerie lighting fit Film School's cinematic entrance and so began an explosion of their unique, moody, disorienting rock music. Guitarist Dave Dupuis was a blast to watch as he was clearly enjoying the energy in the room and giving off plenty back. The set included songs from many of their records, but "Letric" was the highlight for me. Its progressive, psychedelic feel is everything I love about Film School and their impressive live show.

I've followed Film School for awhile and their newest record Hideout is definitely worth picking up {review}. The band is kicking off a five-week tour and are getting plenty of buzz. including a recent review in Playboy Magazine. Once again, KEXP finds the bands people need to know and helps get them out there to the listeners.