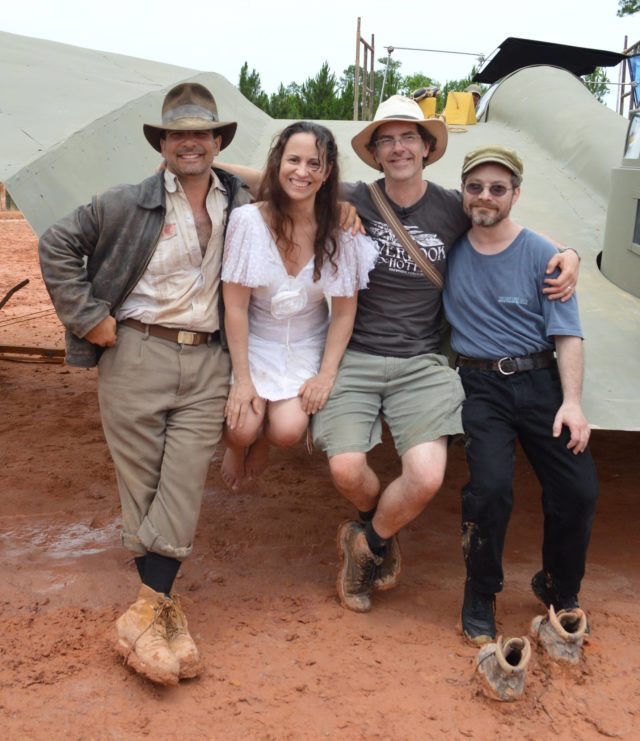 As mentioned earlier this week, Northwest Film Forum screened a double feature of Raiders! The Adaptation, and the new documentary about it, Raiders! The Story of the Greatest Fan Film Ever Made, last night {Thursday, 6/2}. Raiders Guys Chris Strompolos and Eric Zala were there to present both films, as Seattle was the kick-off of their “Raiders Follow Your Dreams Tour.”

Being the persistent fangirl that I am, I managed to talk my way into doing another interview with these guys. < insert Kermit “YAYYYYYYYY!” here, complete with flailing arms

{Heads up: the Raiders! Double Feature comes back to NWFF June 17 through 19! No Raiders Guys for those screenings, but still totally totally worth it}

TIG: Maybe you had prepared yourself for this since the book about you guys came out first, but did you think it was totally weird that someone wanted to make a documentary about you?

Eric Zala: We had been approached a couple times before, but it never quite felt right. It’s a big act of trust; putting your life out there. Then Chris actually met Jeremy {Coon} – Chris, do you want to take this one?

Chris Strompolos: Yeah. As Eric had mentioned, we’d been approached by documentary filmmakers through the years that wanted to tell our story and it just never quite worked out. So I was on the book tour and screening The Adaptation in the same theater where Napoleon Dynamite had opened, and Jeremy approached me, and he’s got such a calm, professional way about him—the next day we went out to a quick dinner, and it was really decided there. Jeremy is someone that I really felt would get it; he was passionate about the story, he was in alignment in terms of the angle, and he’s also a producer that carries things over the finish line.

TIG: That trust and alignment is really important, especially because you guys expose a bit of vulnerability in the film.

Eric: Yup. That was important to us. We wanted it to be “warts and all” as they say. We weren’t interested in a fluff piece—we wanted it to be real. And it’s a big act of trust, but going all the way is kind of our standard; how we operate.

Chris: And that puts a big responsibility on them, because you can offer up all the darker components of your life, but then what does someone do with that? How do they assemble that into an overall, positive narrative? And I thought they {documentary directors Jeremy Coon & Tim Skousen} handled that part really well.

TIG: I definitely got a little choked up during some of those more vulnerable parts! But let me talk about a happier part right now—Chris, when your wife was talking about meeting you, they showed this clip of you playing in a band with your long, Gothy hair! What was the name of your band?!!?

Chris: Yeah, I’m a Goth at heart. It was Daycare for Dave – DFD was our shortened name. And the reason we named it that was because I took the place of the original singer, named Dave, and the rest of the band said he definitely needed to go to daycare.

TIG: Ha! What kind of music did you play?

Chris: It was a cross between like Stone Temple Pilots and Queen; a little grungy, a little crunchy … but still kind of arty.

TIG: Eric, referencing another part of the documentary, do you feel like your boss ever understood why you had to finish the film?

Eric: No, he never did get it. Had I caved into that pressure and gone back, it would have been just like mundane, routine stuff. There was in fact no urgency for me to even go back; everyone was away at E3 in L.A. And that would have been the most tragic thing. My wife told me later that she wouldn’t have let me do that.

TIG: It was heartbreaking to watch you struggle with that, for sure. Changing vibes, how stoked were you guys when you learned John Rhys-Davies {Sallah} was going to be in your documentary?

Chris: Amazing! That was a Jeremy Coon capture. He {Rhys-Davies} was in Salt Lake City performing with the Tabernacle Choir, and I think Jeremy got 20 minutes with him. And the beauty of the editing is that he is the commanding voice over everything in the film.

Eric: He was also kind enough to send us an autographed cover of Last Crusade! What a thrill. This is the kind of stuff that what we dreamed about as kids. I mean, this kind of stuff doesn’t happen right? But here we are.

TIG: I loved that part. And I also loved when Harry Knowles and some of the people who attended his annual Butt-Numb-A-Thon revealed that they actually considered continuing to watch your film instead of an advanced copy of Peter Jackson’s  The Lord of the Rings: The Two Towers! How did that make you guys feel?

Chris: It’s so flattering and so overwhelming. I mean, what do you say to that? There’s nothing to say.

Eric: Yeah, as Eli Roth said {in the documentary}, it’s never happened in the history of geekdom. And the irony too, of that first screening at the Alamo Drafthouse … I remember noting where the emergency exits were in case I needed to make a break for it. I was like, Chris—are all these people aware that they’re waiting to see a movie I filmed in my mom’s basement??!

Chris: We didn’t really know what we had!

TIG: So if you guys could go back and give your 12-year-old selves some advice, what would it be?

Eric: “Get a better microphone.”

Chris: Hahahaha! That’s a good answer. I would probably advise myself not to care so much about what other people think.

TIG: Well now that you’ve completed that last scene for Raiders! The Adaptation, do you feel a big sense of relief?

Chris: And accomplishment too. Because we pulled off something pretty big; it’s a sophisticated scene. The way it looks is the way we always hoped it would look.

TIG: And how has The Adaptation changed your life?

Eric: That’s a BIG question! I think for me; it’s shown me what’s possible. You know, as kids you don’t know what you can’t do. When you tackle it as adult, you’re all too aware of the risks and limitations, there’s more skepticism and more sense of danger. And we cling to those same lessons that we learn as kids. So it’s changed my life in that it held my feet to the fire and I’ve got a responsibility to stay true to that, and not forget what I learned from this.

Chris: I’ll answer that in a different, but same kind of way—Eric and I have had a different path with filmmaking; but, for us, our rights of passage has always been Raiders. And I think it’s been a beautiful re-calibration every single time it comes back into our lives. It re-calibrates what we feel is true, and what we feel we really want to do in our lives. What the dream is.

Eric: Well said. I’ll only tack on to the end of that … it’s all too easy to forget that. There’s a temptation to forget it, and you have to keep that flame lit.

Chris: What Eric and I always tell young filmmakers is that we’re still uncomfortable. We’re still leading this path and doing what we want, and doing what we believe in—but it’s not a comfortable thing. And you just have to stay true to that. No matter what phase you’re in, in your life. We’re in our 40s, and we’re still coming back to the passions we had when we were children. You’re always gonna come back to that place.

TIG: I think that’s why people love your story so much; you remind them of things they loved when they were young, and you also remind that it’s okay to still love those same things, and keep pursuing what makes you happy … always.

Chris: Yeah, you have to get to the place where you become unapologetic about what you wanna do.

Oh man. I can’t possibly express how much talking to these guys gives me ALL THE FEELS. Chris and Eric are inspiring, hilarious, super amazing film fanatics and I am totally crushing on them forever.

The guys are in Oregon right now (Portland tonight, Salem tomorrow); next they head to Vancouver, WA and then up to Bellingham before departing for CA. Just FYI: it’s not too late to request they make a stop in your town to show the double feature … check out their web site for more info.

Raiders! The Story of The Greatest Fan Film Ever Made is also available on demand, but you don’t get to talk to Chris & Eric on demand. Just sayin’.