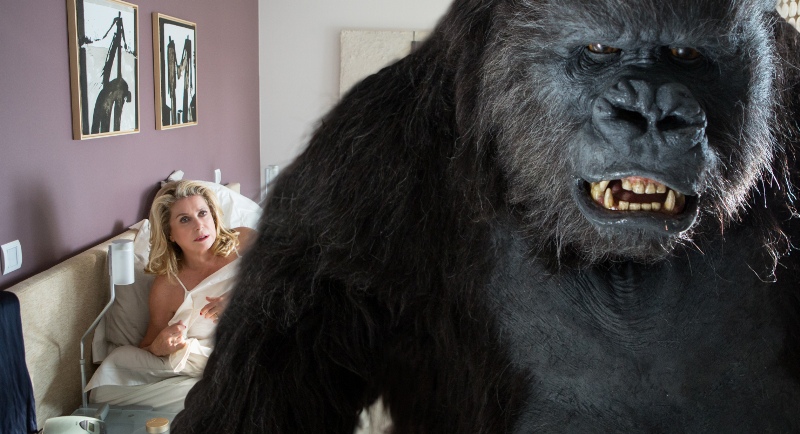 A loving tribute to an alt-cinema master, a buzzy documentary about insect-based cuisine, and a deliriously sacrilegious Euro-satire are among the must-see highlights of SIFF 2016’s final week.

The 1,000 Eyes of Dr. Maddin
{6/4 9p Film Center; 6/5 8:30p Film Center}
I was introduced to the genius work of filmmaker Guy Maddin in 2002, with the gloriously perplexing horror/dance/silent/camp/dream film Dracula: Pages from a Virgin’s Diary. To this living moment I remember where I sat in the Little Theatre (back when the NWFF was there), that I experienced a feeling of floating as I walked home after the screening (not a result of any substance, I promise), and that in subsequent days I would become aware of a profound sense that I’d discovered something new and wonderful in my world. So, yeah, I enjoyed The 1,000 Eyes, which is a funny, quick-n-lively discussion of, and loving tribute to, Maddin’s deliciously eccentric work. Documentarian Yves Montmayeur (who produced a similar study of Michael Haneke a few years back) does a great job of incorporating music, film footage, photos, and interviews (old and new) with Maddin (such a charmer) and kindred spirits like John Waters, Udo Kier, Isabella Rossellini, Kenneth Anger, and the Brothers Quay. Eyes is imbued with an experimentalism worthy of its subject, and it would work well as a primer for Maddin newbies. I came away wanting to revisit many of the Maddin features and shorts I’ve seen and adored — and even a couple I haven’t been exposed to — in the fourteen years since my existence was altered.

The Brand New Testament
{6/3 9:30p Egyptian; 6/5 2p Uptown}
God, it turns out, is an assholish slob living in present-day Brussels; his beloved son, JC, has gone off to become famous with his 12-man entourage. The not-so-Almighty also has an unassuming preteen daughter named Ea, and one day she decides she’s had enough of her dad’s unchecked wrath. She leaks the preordained death dates of every human alive, then sets out to collect her own cadre of apostles in a new-and-improved world. This darling of the international festival circuit is a wondrously entertaining satire that’s deliriously, delightfully sacrilegious.

Bugs
{6/4 11a Pacific Place; 6/5 4p Pacific Place}
Lively and enlightening documentary about a food trend many of us prefer not to think about: insects as a protein source for humans. A team of chefs from Copenhagen’s Nordic Food Lab (fronted by infectiously enthused Ben Reade and whip-smart Josh Evans) travel the globe researching new sources of sustainable food… which, yeah, means eating all kinds of exotic creepy-crawlies. Meanwhile corporate food producers hover on the fringes of alt-protein discoveries, ready to pounce on a budding new market, much to Ben’s charming chagrin. A zippy, stylish, fascinating 76 minutes.

Sonita
{6/4 3:30p Shoreline}
The titular subject of this compelling, infuriating documentary is a teenage Afghan refugee living in Iran; she aspires to be a rapper, ideally with a fan base slightly larger than the small group of neighborhood kids who’ve memorized her lyrics. Her story takes on a new dimension as her mother surprises everyone — including the documentarians — by showing up to announce that Sonita’s marriage has been arranged for the sum of $9,000, exactly the amount her brother needs to purchase his own bride. This is an oddly-paced film that really comes to life as the filmmakers become subjects themselves, ultimately acting as advocates for Sonita as she considers the next steps of her life path.

Tag
{6/2 9:30p Egyptian; 6/7 9:30p Uptown}
Wonderfully batshit Japanese film that begins with a busload of high school girls suffering a collective gruesome demise, save for lone survivor Mitsuko; she’s left in a nightmarish funhouse world of mysterious forces threatening ghoulishness at every turn. It’s also a world of discovery and heart-tickling rapture, a decidedly feminist coming-of-age pastiche scattered amongst the copious gore. Tag is one of six (!) feature-length films by genre maven Sion Sono released in Japan last year, and I’m glad it eventually made its way to us. (Looks like Imaginary Amie is too!)

Between Sea and Land
{6/5 6p Uptown; 6/7 4p Uptown}
This Sundance multi-award winner showcases writer/producer Manolo Cruz in a go-for-broke amazing performance as Alberto, a young man imprisoned by a degenerative muscular disorder and cared for by his longsuffering mother Rosa (Vicky Hernandez, also wondrous) in a small Colombian fishing village. He longs to visit the Caribbean sea, which is, like many of the things about which he fantasizes vividly, close by but infuriatingly out-of-reach. As Alberto slips into anguish, Rosa makes some tough choices in an effort to realize her son’s modest but challenging dream. A nicely crafted, The Sea Inside-esque film that conveys a distinctive sense of place, even as moments of sentiment-bludgeoning (up to and including the climax) fall to the simplistic side.

Captain Fantastic
{Viggo Mortensen tribute 6/11 1:30p Egyptian; regular screening 6/12 2:30p Uptown}
Viggo Mortensen shines as a devoted father of six living off the land (and off the grid) in the wilds of Washington state, until a sad event leads the crunchy brood back to the outside world. Solid pacing and charming performances cover the credibility strains in plot and characterization until the third act, when the story leaves the rails for good. Entertaining, but flawed.

Don’t Think Twice
{6/10 7p Uptown; 6/11 11a Pacific Place}
Mike Birbiglia’s comic sensibility is not really my jam, and I didn’t enjoy Sleepwalk with Me a few SIFFs ago. I found this new film, a behind-the-scenes story of a struggling NYC improv troupe, a bit more enjoyable… maybe because it wasn’t ALL about Birbiglia’s character (another man-child, surprise surprise). I chuckled quite a few times, mainly at Keegan-Michael Key, and was quite swept away by a lovely solo performance late in the film by Gillian Jacobs. Overall, still not really up my street, but far from terrible.

Nakom
{6/6 6:30p Uptown; 6/7 3:30p Uptown}
A talented medical student named Iddrisu makes the long journey to his native north-Ghanaian village after his father’s sudden death, and is soon pulled into a variety of dramas around the jeopardized family farm. Iddrisu struggles between “old nonsense” traditions of his homeland and the relative progress he’s come to know in the city; Nakom doesn’t stray far from old-vs-new narrative tropes. But production-wise it’s polished, very nicely shot, and often quite a pleasure.

Paul à Québec
{US Premiere. 6/2 8p Kirkland; 6/4 11a Egyptian; 6/5 5p Uptown}
This well-rendered but ultimately maudlin adaptation of Michel Rabagliati’s graphic novel The Song of Roland, about a graphic designer and his relationship with his dying father-in-law, is one of those well-meaning movies that are tough to criticize, or indeed to find much fault with at all. I simply didn’t love it as much as it wanted me to. But if you find yourself in the mood for a protracted end-of-life story, with lots of white heterosexual French-Canadian characters, then by all means grab a packet of Kleenex and go.

The Queen of Ireland
{North American Premiere. 6/2 7p Pacific Place; 6/4 12:30p Uptown}
Irish drag performer Panti Bliss became an accidental activist after her chatshow comments about homophobia (and the baffling legal action that ensued, charmingly dubbed “Pantigate”) led to international attention that helped pave the way for her country’s historic marriage-equality referendum. What begins as a fawning and sluggishly-paced patchwork of Panti-worship — the first half almost feels like a vanity project — becomes a truly moving docu-profile.

Rara
{North American Premiere. 6/7 6:30p Uptown; 6/8 3:30p Uptown}
Chilean family drama about a 13-year-old girl whose home life is thrown into upheaval when her prissy asshole of a dad, bugged that his daughters are being raised by a lesbian couple, connives to gain residential custody. An OK film, and a good reminder that there’s a huge, backward-thinking world outside our progressive PNW bubble.

Southside with You
{6/11 7p Uptown; 6/12 7p Egyptian}
A rather bland imagining of Michelle Robinson and Barack Obama’s first date on a summer afternoon in 1989. They go to an art exhibition (Ernie Barnes), then to a community meeting (Michelle witnesses Barack whipping up a crowd), then to see a buzzy new film (Do the Right Thing)… with a lot of walking and talking between. And I mean A LOT. Some may find this film to be a tender, Before Sunrise-esque exploration of the beginnings of a famous love. For me (and I’m someone who likes the real-life inspirations, mind you), it was just a long 80 minutes.

Up For Love
{6/10 8:30p Kirkland; 6/11 6:30p Egyptian; 6/12 12p Uptown}
Silly French-language rom-com about an unlucky-in-love attorney (Virginie Efira), her meet-cute with a noted architect who happens to stand less than 4.5 feet tall (Jean Dujardin, oft digitized), and the challenges facing contemporary professional women in male-dominated professions. Just kidding on that last point! Prioritized here are the hetero white dudes’ (there’s more than one) problems and frustrations, many of which are illustrated by a relentless barrage of cheap height-related sight gags. I can’t claim I wasn’t sporadically charmed by Efira and the CGI-shrunken Dujardin, though, even as the paint-by-number plot and tropes were filled in before my eyes.