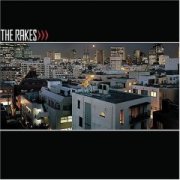 If I had a dime for every band from England that takes equal portions of Gang of Four, the Clash, and Public Image Limited and turns it into vaguely ironic rock music, I would be a very, very rich man. I mean, disgustingly rich at this point. That said, why am I pleasantly surprised by so many of them? Am I just a sucker for the sound? Am I feeling sympathetic to England after they got wiped out by Portugal in the World Cup (thank you very much Wayne Rooney). Am I not getting enough oxygen? Likely, it's some bizarre combination of these, but hey, the upshot is that I really get a kick out of The Rakes' Capture/Release.

The Rakes are most similar to their British brethren Bloc Party, but a little less serious and polished than that of the Benetton Ad boys. The Rakes seem to fill the musical void (alright, maybe its not a void because that implies that something had to be there) between aforementioned Bloc Party and Art Brut — they've got guitars, thick British accents, prominent drums that sound raw and unfiltered, and they sing about the rock lifestyle and other youth-related themes. "Strasbourg" careens in to open the album like a punk-ified Pulp song about meeting in West Germany, 1983 and having "nothing left but the vodka on your breath." "Retreat" takes a little less aggressive edge with a real dance-rock feel like Bloc Party's "Banquet" and the same could be send for "22 Grand Job." This might be the Achilles' Heel of Capture/Release, where some of the familiarity breeds a tad of contempt when the songs begin to blend together without notice.

Luckily, the Rakes change the pace with "Open Book," which has aspects of the Clash and Madness blended into an infectious song about lying awake at night full of anxiety about love. They do an excellent job of melding tension with a touch of light-heartedness, with ever-so-brief digressions into what might be new wave ska guitar (really, its good, although it might not sound that way). "Binary Love" has an odd Depeche Mode feel to it, which might be on purpose considering the title, but there's a low, sinister rumble to the vocals that make you think David Gahan is creeping up behind you. When you combine it with the intro to "We Are All Animals" (which could be from a cover of the Cure's "Close to Me"), you can really see the Rakes wearing their influences on their sleeves. But then"We Are All Animals" departs from the Cure station and heads back into punk rock by the time you get to the chorus, making it a surprisingly refreshing song.

There's definitely something to be said for opening a song with a long, rolling bass and drum-driven intro at probably goes beyond "intro" when it actually represents almost half the song. "T-Bone" has one of the most engaging three and a half minutes to come out this year. The most Clash-like track, "Terror!" is also one of the best on Capture/Release, with a horrifically catchy melody that is balanced by the apprehension created by the stripped down arrangement. The closing "All Too Human" takes it back to a more electro-beat takeoff from the Pulp songbook and wraps up the album nicely.

If anything negative can be said about Capture/Release it's that there's really nothing on the album that is truly distinctive to the Rakes. They've really nailed down the dance-rock sound, which isn't necessarily a bad thing, but you'd never call it "that Rakes sound." However, we in the music reviewing business (ok, is it a "business" if I don't get paid as such?) tend to put a lot of weight into impressing us with originality and honestly, we tend to be seduced by noise (Atari Teenage Riot as best album of 1997 anyone?) just because it's different. So, why not enjoy something even if it doesn't shatter the Earth with new sound? That the Rakes: good clean fun.