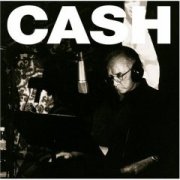 I believe in a lot of odd things: Free Masons, UFOs, the Illuminati, Sasquatch, Mokele-Mbe, Champy, and the viability of a third party in the U.S. Ghosts, however, I cannot abide, and American V: A Hundred Highways is like popping a ghost into your CD player and have it tell you all about death and the hereafter. John R. Cash passed on almost three year ago, and producer Rick Rubin put together what is supposedly the last Cash studio album, a collection of songs about death and dying, including the last song Cash wrote before his death. The album is far from an unfinished manipulation like Jeff Buckley’s Sketches from My Sweetheart, the Drunk or the fifty albums Tupac has released since he died; instead it's a haunting conclusion to the musical career of the greatest legend in rock and roll.

Johnny Cash was a man torn between his rough and tumble upbringing, his torment through addiction, and his eventual redemption through his faith (with help from his wife, June Carter). His song selection, especially since his revival in the American series, has exhibited this dissonance, spanning from straight spirituals to grisly murder ballads to tender love songs. American V focuses mostly on Cash’s approaching death. His final song of his own, "Like the 309" is about the funeral train as Cash’s eerily faltering voice proclaims "Put me in my box on the 309." Rarely can you hear so evidently a man facing his own end in such a forthright fashion. The album opens with "Help Me," a plea to the Lord to walk with him on to death, asking "Release these chains of darkness." Rubin adds a thick string section to the song, adding to its weight. This is balanced by the "fire and brimstone" of "God’s Gonna Cut You Down," a raucous song full of handclaps and foot-stomps; if you wanted to remind the spectators in a sports arena of damnation, this would be the way to do it. "Further On Up the Road" works on themes of the afterlife, reminding us that we’ll all meet up "up the road." Again, Rubin adds some ghostly woodwinds that emphasize the mood of the track. Cash tackles regret on "A Legend in My Time", where he muses "If loneliness meant world acclaim, everyone would know my name." You can hear him singing to June on "Rose of My Heart," a song made especially poignant when you consider June died not too long before Cash passed on himself.

There are some missteps. Cash seems to have a predilection to covering soft-rock ballads like "If You Could Read My Mind" on American V. It just feels out of place and lacks the conviction of many of the other songs on the album. "Love’s Been Good to Me" is well meaning, but again, it feels so trite compared to the passion found elsewhere on American V. Outside of these digressions, the album is filled with honest outpouring from a man at the tail end of his life.

The album closes with two tracks where Cash bids adieu to his friends, family, and fans. On "Four Strong Winds," he reminds us that many things will not change as he moves on. (You have to credit Rubin on excellent song ordering on the album, too. It feels like a narrative of Cash’s journey.) The finale, "I’m Free from the Chain Gang Now," is a tender song that encapsulates Cash’s musical and personal life. It tells the tale of a wrongly accused man who ends up in jail, but death frees him from his imprisonment, a theme that has been in Cash’s music since "Folsom Prison Blues." It seems fitting that he would say goodbye with such a song, with a melancholy tone that is bittersweet to hear.

If Rick Rubin is remembered for anything, it should be for his inspiration to convince Johnny Cash to come back and record with him in 1994 for American Recordings. Almost lost to the ages, Johnny Cash has become one of the most enduring figures in rock and roll, with fans for over fifty years. Rarely do musicians have such a durable career, once that survives shifts in music styles, personal tribulations, and creative highs and lows. Even more rare is a musician whose influence can be heard in almost every genre of popular music today, whether it's in the sound or content. American V: A Hundred Highways closes the final chapter of Cash’s musical career, and it’s a fitting eulogy left by the Man in Black himself.