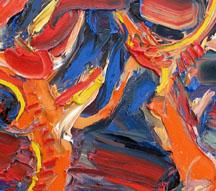 For literature and music nerds like me, Starvation Under Orange Trees is like Christmas, Hanukkah, and Kwanzaa all rolled up into one mega-gift.

The album, the product of San Francisco songwriter Jon Bernson recording under the moniker Ray’s Vast Basement, is a concept album originally written to accompany a stage production of "Of Mice and Men," and the record dutifully covers and conceptualizes the greater part of Steinbeck’s catalog.

I found it hard to actually focus on the musicianship of the album, because the whole time I was trying to guess which novel each song was addressing. However, once I was able to cease geeking out on the veiled allusions to "Cannery Row" and "East of Eden," I was surprisingly impressed by the diversity, depth, and talent shown in each individual song.

For obvious reasons, the tracks on Starvation Under the Orange Trees are all very cinematic and narrative in nature. One of the album’s strongest songs is California’s Gone (my ranking of this track could be skewed due to the fact The Grapes of Wrath is my favorite Steinbeck novel). It is a driving, optimistic song rife with vibrant acoustic guitars and jangly piano melodies that serves as a refreshing and ironic take on the American Dustbowl, unlike other more somber and blatant tracks based on this Steinbeck novel such as Bruce Springsteen’s “The Ghost of Tom Joad” or Woody Guthrie’s “Tom Joad.”

However, there are many places on this album that effectively echo the serious and often troubling subject matter of early to late twentieth century Californian migrant workers. “The Story of Lee” is a haunting track full of unique instrumentation and eerie vocal harmonies, while “Black Cotton” sounds like the channeling of Guthrie’s ghost, only with a more modern and sprawling sound.

The fact that this album was, indeed, effectively implemented as the score to a stage play is evident in the short instrumental tracks, such as “Salinas River Theme” and “Danny’s Party,” which paint very vivid aural portraits.

Starvation Under the Orange Trees is a superb album and makes me wish that I could have seen it performed side-by-side with "Of Mice and Men. " National tour, anyone?