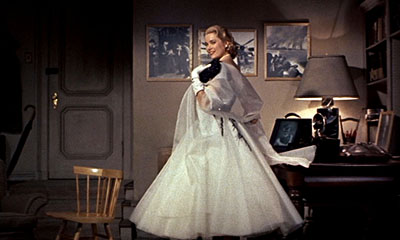 I have a tendency to post entries here whenever my favorite Alfred Hitchcock film, Vertigo, is being screened (here and here) and this is no exception. However, this screening, Thursday night at SIFF Cinema, has two things going for it that the others didn't: 1) it's being screened in high-definition for the first time and 2) it's a double-feature with Hitchcock's second best film, Rear Window (or at least my second favorite, but I am also fond of Notorious, Strangers on a Train, Rebecca, North by Northwest, Lifeboat, Psycho and The Birds). Those are also Jimmy Stewart's best films and feature the two most radiant Hitchcock blondes: Kim Novak and Grace Kelly.

Thursday, April 16
Hi-Def Hitchcock
On the big screen for the first time in High-Definition!
Double bill: two films for the price of one!

Rear Window
7:30pm
d. Alfred Hitchcock, 1954, 112 min.
"Look out the window, see things you shouldn't see," nurse Thelma Ritter tells Jimmy Stewart, a New York photographer housebound with a broken leg. But he can't help it, and after he thinks he's seen a murder, he gets his gorgeous girlfriend Grace Kelly involved. Feel free to interpret Hitchcock's disturbing subtext about voyeurism as a stand-in for "filmgoing."

Tickets for both are $10 and can be ordered through the SIFF website.

And, for the hell of it, here's a video to the Harvey Danger song "Carlotta Valdez," using clips from Vertigo, the movie it is based on and inspired by: