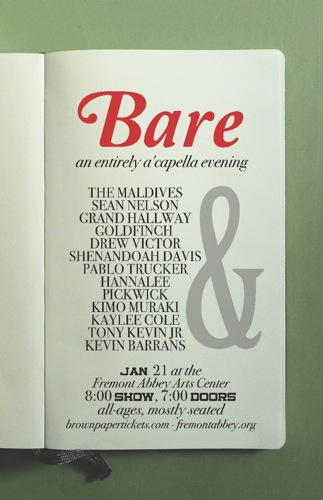 The first two weeks of 2011 have set the bar pretty high for shows: Lovesick Empire killing the stage at a real-life $5 cover night at Neumos, Damien Jurado selling out Columbia City Theater, and back-to-back nights with The Head and the Heart (an impromptu night at Porterhouse in West Seattle last Thursday, and Friday’s packed house at Neumos). Suffice it to say that what we’re about to see this week is no exception.

On Friday night, the Great Hall of the Fremont Abbey will be filled to the brim with nothing more than the voices of some of our favorite artists — The Maldives, Sean Nelson, Grand Hallway, Goldfinch, Drew Victor, Shenandoah Davis, Pablo Trucker, and a half-dozen other talented local folk will be hosting an entirely acapella evening, and we’re already counting down the minutes to the show. It’s the second annual installment of a show called BARE, where we’ll be spending the evening sans instruments, electronics, or any kind of amplification — just the audience, the voices, and the rafters of the hall.

***UPDATE: We’ve got two tickets to give away to the show, and we want to send you and a friend! Send an email to tig {at} threeimaginarygirls.com by 5pm on Thursday, January 20th with the subject line BareItAllAtTheAbbey, and tell us why we should choose you to attend the show.

We totally get it if you don’t want to run the risk of the show selling out, so click here to pick your tickets up while you still can — the event is all ages, and prices are only $12-$15 depending on where you’d like to sit your seat.