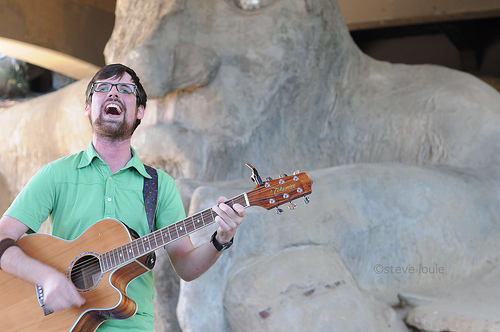 Recommended show: Fishboy returns to Seattle this Friday at the Mars Bar

Lucky us! It’s been less than a year since Fishboy’s last stop in our fair city, and now, he’s back for more! This time, he’ll be solo, accompanied by only his fantastic songs and his wit. Lead Fish-dude Eric Michener writes insanely catchy and clever albums, such as 2007’s rock opera Albatross: How We Failed To Save the Lone Star State with the Power of Rock and Roll about trying (and failing) to save the state of Texas with the ghost of Buddy Holly (one of my favorite albums of the last decade). It’s like if Neutral Milk Hotel wrote fun songs all in the vein of “Holland 1945” instead of heartbreaking ones. You can stream the entire album here.

Rumor has it Fishboy is working on a new album right now. We got a bit of a taste the last time they were in town at Vera, though I’ve heard most of those songs have been scrapped. Michener always has a way of keeping his fans on their toes, so you never know what to expect, except a great time filled with fantastic songs. Stop into the Mars Bar on Friday to check out someone we can truly call a Three Imaginary Girls favorite. Show starts at 8:30 (Fishboy’s on first) and also playing are the Terrordactyls, the Heligoats, and ten speed.