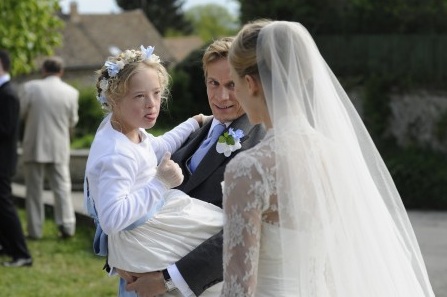 Each year the giddy joy of perusing the new SIFF roster gives way inevitably to a sense of fatigue at trying to differentiate, by 25-word blurbles, the hundreds of movies that begin to blend together into genres and tropes and overlapping plots. There are the family dramas where A Secret Is Revealed that Changes Everything, the coming-of-age tales, the coming-out tales, the ones where a lovely lady gets her groove back by sleeping with a strapping native fellow, tales of foreign oppression, heists gone bad, things with ninjas, and of course the family comedies where A Secret Is Revealed that Changes Everything.

The Wedding Cake is a lovely example of a how it really all comes down to execution. Weddings are so laden with symbolism and ripe for drama that it’s no wonder filmmakers are drawn to them, nor that so many of them ride right off the rails (Rachel Getting Married comes to mind). But here’s a movie with a fairly formulaic premise (it’s a family comedy, see, and a secret is revealed that changes everything) and even somewhat clichéd execution that’s sweet and charming and very satisfying.

The movie takes place on the wedding day of a hopelessly attractive French couple. Their wealthy families are intent on making the day appear perfect despite the perfectly obvious reality that most everyone is bringing naked hatred, misery, insecurity, or overall jerkwad-ness to the table for one reason or another. There are frankly too many characters to keep track of all the relationships, but it doesn’t really matter because you don’t really have to care who’s related to who to enjoy the myriad flavors of atrocious posh-person behavior and wish upon them some sort of karmic come-uppance.

But the best part is that their comeuppances are not, for the most part, at the hands of further jerkwaddery, but by, well, love. I know! Shouldn’t that sound so corny? It’s really not, though! Or, ok, maybe a little, but in such a good way. Because although the movie is ostensibly about the bride and groom and their various struggles to figure out what it’s going to mean to be married, really it’s about the bride’s grandmother, whose delightful secret is so sincere that it just eats up all the awfulness everyone else is working so diligently to cultivate.

The performances are as delicious as the opulent costumes (the costume designer must’ve had a blast on the film—the hats alone are so tastefully absurd), and the actors all look like they’re having a lot of fun with their roles.

The director Denys Granier-Deferre strikes a nice balance between moving the story along and letting the characters reveal themselves. The over-the-top performances coexist nicely beside much more nuanced ones. He also does a great job with the music: the fabulous orchestral soundtrack sets the tone so well that I could just let it carry me along even when I wasn’t entirely clear where one plotline or another was heading, or how I should probably feel about it.

The bride (played by Clémence Poésy, one of the best French names of all time) isn’t particularly likeable, unfortunately (despite being, seriously, freakishly pretty), though she has her redeeming moments (ministering to her sick grandmother, kneeing a jerkwad in the balls). Also, the plotline between her and the groom grows a bit tiresome after a while—they don’t really trust one another and seem uncertain about why they should get married at all.

But the movie doesn’t linger too long on their squabbles, and instead gives a surprising amount of room to other stories, like the friendship that develops between each family’s black-sheep sisters, or the sweet and irreverent kindness of the nieces and nephews, or the bride’s mother’s appalling attempts to get the priest to cover, in Ashcroftian fashion, the patron saint statue in the church because the method of her martyrdom is too “disgusting” for a wedding. Because as fun as it is to laugh at the antics of a bunch of well-dressed petty people, it’s even more fun when you also get to watch some clearly very sweet people striving in the midst of it all just to be happy on their own terms.