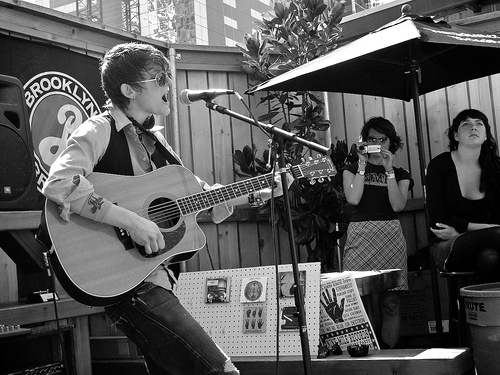 Were there a way to insert the needle-pulling-off-the-record noise here as the sound effect, we’d do it. Because this is the noise that rings out when someone talks about how they haven’t heard of Chris Pureka or, more specifically, haven’t listened to the album she put out about a year ago called How I Learned To See In The Dark. It’s a literal symphony of earnest ache, of sadly-toned sounds fused with a glimmer of hope, of moments filled to the brim with faded photographs and creaky floorboards (worthy of a page full of adjectives, in fact, that you can read in their original context here).

The bottom line is this: simply put, Chris’s music isn’t this way because it’s some trendy extension of some alt.americana.lumbercore sound that so many people seem to be jumping on the bandwagon of — her music is this way because it has to be. It’s got no other way, similar to how the alphabet lays out or how stairs connect us between the floors of our houses… it just is. And rarely these days do such honest leanings and compelling sound meet the way hers do.

So, with all that said typed: first off, head on over to the album’s page on her website and pick up a copy of the record. (Shame on you for not owning it already, PS.) Second, take a minute to get yourself a ticket to her upcoming show at Chop Suey before it sells out — she’s taken the Tractor to near-capacity more than once her last few runs through town, and there’s no reason to believe that won’t be the case next Tuesday as well. And thirdly, if you’re up for a little roll of the dice, take a minute to send us an email for a chance to win two tickets to the show, courtesy of the fine folks over at Chop Suey.

Just drop a line to tig {at} threeimaginarygirls {dot} com with the subject line “LetTheLightThrough” and tell us why we should pick 21-or-older-you and a friend to send to the show for free. We’ll pick a winner on Monday, March 21st, so be sure to have your entries in by noon that day to be considered.

PS, did we mention that Kristin Allen Zito (of The Trucks fame) will be opening? Double win! We’ll see you at the show.