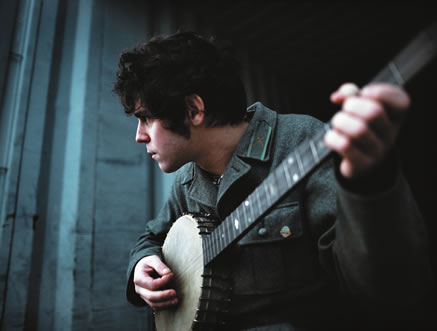 My love affair with Langhorne Slim began many years ago (sadly, 2005 is indeed ‘many’ at this point, definitely more than ‘a few’) in a tiny room at the Museum of Television and Radio in New York City. KEXP was doing a live broadcast, and I’d taken the week off from work to hang out in the city, hand out swag, set up chairs, go on coffee runs, you know — all that glamorous stuff. And somewhere out in the dusty corners of the interwebs there’s several pages of blog posts about that week in the city, including this series of sunshine-through-the-window moments that made up Langhorne’s set on John (Richards)’s show. You know. Back when every moment of every set warranted a three thousand word review:

so langhorne (sp?) proceeded to be the sweetest guy, sneaking off to warm up and coming back in about four minutes before his set, and immediately blowing us out of our seats. picture zoot suit pants, shiny green shoes, some kind of old graphic wifebeater, a humphrey bogart hat, and a tooth missing on the side in the most perfect place. (or, you can check out bill’s shots on kexp when he fixes them tomorrow – I think something happened around six east coast time that had to do with stuff not loading the right way or whatever). now, he smiles and chats and thanks you for coming and he’s one of those people you want to support in every way you can so that he can just create and be and make more and do more of – everything. then he gets behind the microphone with his acoustic guitar with the worn pink flowery strap and all of a sudden there’s an old black man howling away about modern day blues from his front porch in the south someplace, but you can tell he’s lived in new york too, from the way it’s hardened his point of view. and it’s happening at the top of his lungs. we could barely speak, totally bowled over from the front row.

The day — well, the whole week — was total perfection. And thanks to modern technology, you can relive all that gorgeousness firsthand and hear the whole set here (viva la KEXP!). PS: you can hear him live-live, too — this week! Because Langhorne Slim is coming to Seattle this Thursday {7/14} to play a set at the Tractor, and we’ve got two pairs of tickets to give away to the show. Yes!!

Just send an email to tig {at} threeimaginarygirls {dot} com with the subject line “FacesAllBlastOff” sometime between now and 5p on Wednesday, July 10th. We’ll pick two lucky winners and notify you by email by the end of the calendar day on Thursday, and your name will be on the list at the door. Simple as that! And if you don’t want to wait on it, noodle on over to the Tractor’s site and pick up a pair of advance tickets. Trust us — you won’t be sorry!