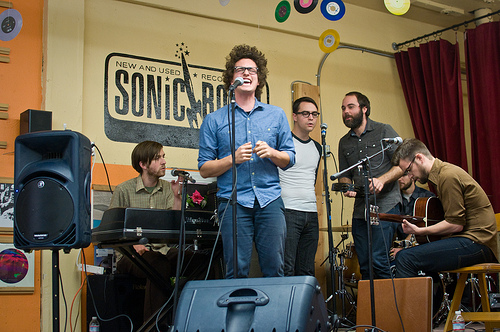 It's a whole new year with a fresh round of shows to get excited about — and to kick of the ticket giveaways, how about a pair for one of the PNW's new favorite local bands? Pickwick will be playing at The Doug Fir down in Portland next this Friday, January 13th, and you can enter to win a spot +1 on the guest list!

In case you haven't had an ear to the ground these last few months, Pickwick is taking the world by storm at pretty much every turn: a ginormous success of a show at the Neptune, followed by some time in the studio slated to birth an album that half of Seattle already has on their 2012 top-ten list; placing at number nine on KEXP's best 90.3 of 2011, firmly sandwiched between Beirut and Adele with a scant EP; and gorgeous, seemingly effortless videos that keep surfacing like Sound on the Sound's Doe Bay Sessions and the now-famed UW reading room rendition of Blackout.

Ready for a road trip? Just send an email to tig {at} threeimaginarygirls {dot} com with the subject line "PickwickInPDX" anytime between now and noontime next this Wednesday, January 11th. The winner will be notified by email by Wednesday evening, which is plenty of time to come up with a reason to call in sick for Friday and drive down early to spend the day in Seattle's sister city.