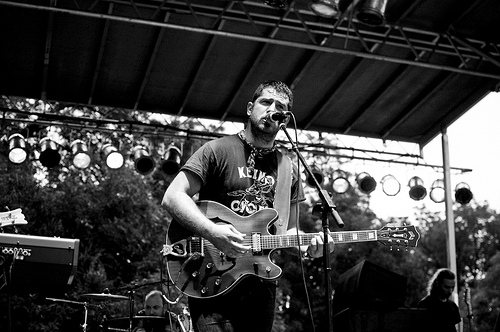 Recommended show + free tickets: We Are Augustines at the Neptune {4/9}

It seems like only yesterday that I was standing at Zilker Park in Austin, finally feeling about four percent relief from the heat post-sunset, losing my shit to the sweet, gritty madness that is a We Are Augustines set. Even though they were performing on one of the smaller stages at 2011's Austin City Limits festival, they were one of the most impressive acts of the weekend: whipping the crowd into a frenzy, half-full of die-hard WAA and Pela (R.I.P.) fans, half full of people streaming toward the stage like a moth to a light, murmuring "Who is this?" and digging through their schedules to figure out the name of their new favorite band. We Are Augustine's ability to convey a dirty, shredding, true indie-rock vibe that's interspersed with a melodic, full-volume earnestness gives them a sound that no other band can really replicate, and that vibe-sound is the reason I drop everything I'm doing and catch their sets every chance I get.

If you've never seen them before or are chomping at the bit to see them again, you're in luck: while it is opposite both Radiohead's and Andrew Bird's shows the same evening (hey, that just means there's going to be more room up front for you and your friends!), We Are Augustines will be taking the second slot opening up for Band Of Skulls this coming Monday, April 9th at the Neptune — and we've got a pair of tickets to give away to the show. Just drop us an email at tig {at} three imaginary girls {dot} com with the subject line "LostToTheLonesome" so that we know it's you. We'll pick a winner at 5pm sharp on Thursday (yep, that's April 5th) and email you to let you know that you and your +1 are on the list for the show, and you'll be set for a killer time on Monday night. PS, both the headliner and the first-of-three, Posse, are excellent bands as well, and everyone here at the imaginary office highly recommends coming early and staying late to catch all three sets that night.

Good luck! We'll see you at the Neptune!