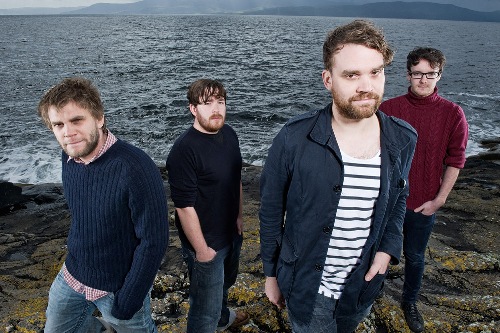 Frightened Rabbit is the biggest and best indie.large-guitar.sadsound that you’ll find touring this side of the pond. Period.

Outside of a run-in with fellow Scotlanders We Were Promised Jetpacks, who lean more to the indie.large-guitar.angry.sadsound side of chart, there’s really no comparison between Frightened Rabbit and other bands out there today. Epic, heart-in-a-meatgrinder lyrics meet vocals that range from anthematic to sparse, as the songs themselves seem to dictate. Add two parts big-bodied electric, the occasional stripaway acoustic track, and a whole lot of livin’ where the sun stays sparse kind of vibe — and you’ve got one of our favorite bands, no questions asked.

If by some stroke of bad luck you’re not familiar with these chaps, check out their discography here — we’re particularly in hearts with The Midnight Organ Fight, but the new album is just as swoon-tastic — and catch frontman Scott Hutchison covering the Lemonheads (I know, right?) for the AV Club Underground sessions here.

Convinced yet? Come see for yourself! Frightened Rabbit will be playing at the Showbox this Thursday, October 7th with Plants and Animals. Tickets are $17.50 adv, $20.00 DOS and are available here.

{Photo courtesy of Frightened Rabbit. Want more? Check out the shots from their last tour through town in the imaginary flickr pool!}