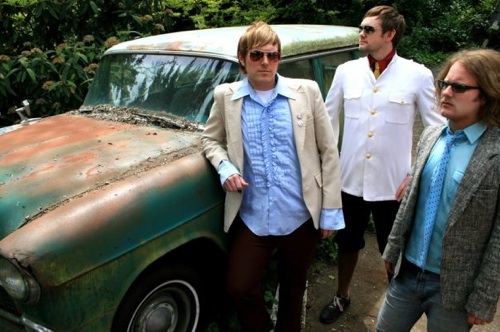 The last time I saw Tennis Pro, they were singing Liz Phair songs in dresses…a memorable event, not just because of their attire, or the fact that it was the 6th Anniversary of TIG, but also because these guys CRANK out some seriously bouncy power pop! But uh, where have they been since then, you might ask? Well, I was fortunate enough to run into Mr. David Drury during all the SIFF festivities and that’s when I found out they didn’t really go anywhere, they’ve actually got a brand new album, and (no kidding) they’re totally BIG in JAPAN.

This news made me incredibly happy, and started me on a kick of listening to Cassie’s Junior Varsity Make-Out Squad, and Are You There, God, It’s Me Tennis Pro – reminding me how much fun they are live and also that they have a song called “Imaginary Girl” that rocks my little heart out. The new album is called Shimokita is Dead, and Tennis Pro is having a CD release party/show at Chop Suey this coming Thursday {6/30} so everybody can hear what it sounds like. In the meantime, here’s a preview to get you ready:

Shimotika (pronounced Shuh-MO-Key-tah, according to their press release) starts rockin’ right away with “Dance Hit Number 1”, mashing up some deep bass and drum beats reminiscent of old-school tunes by The Fixx with talky-throaty vocals walking you through the ways to let go – and heartily encouraging you to make out dance – “well do you know how to dance? | well yeah, I bet you do | take it out on the floor, let loose, show me what you can do.”

The album rolls right into jumpy power pop with songs about bicycles and desire, backed by bouncy lyrics and hand-clappy notes – basically there’s no way you’ll be able to sit still while you listen to this album. There are several solid get-stuck-in-your-head hits here. Among my favorites: The squee-worthy opening track, the sing-along friendly “Motorcycle”, the guitar-heavy “Rock Over Tokyo” (to the future Mrs. Tennis Pro, can you be my rock and roll princess tonight?), and the one I keep hitting replay for, “Clothing Optional Christian Barbeque”, which will have you chanting “N-C-N! No clothing neccessary!“ in less than a minute.

The final verdict? Shimotika is Dead is one of those albums that you can load into your iTunes and listen to all day without getting tired of it, and I fully expect it will become one of my regular go-tos for cheering up, or backing my exclusive one woman lunch break dance parties. I can’t think of a better way to spend $10 than to see Tennis Pro perform it live – especially since they’re playing with Thee Emergency, Blue Skies for Black Hearts, and We Wrote the Book on Connectors. See you there!