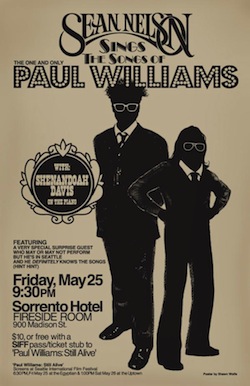 Attention "Rainbow Connection" and Sean Nelson fans! There is a Paul Williams double shot of awesomeness happening this Friday {5/25}.

In honor of the documentary Paul Williams is Still Alive, playing at SIFF, Sean Nelson has set up a night of singing Mr. Williams’ songs—with Shenandoah Davis on the piano—at The Sorrento Hotel Fireside Room. Trust us: YOU DO NOT WANT TO MISS THIS.

First off, the movie looks hilariously amazing! Second, Sean singing in an intimate, cozy venue is an experience not to be missed (coincidentally, Sean himself is also hilariously amazing). Third: If you buy a ticket to the film, you can get in FREE to the show by bringing your ticket stub with you! So, you can buy a ticket for $11 ($9 SIFF Members) and get into the movie AND Sean’s show. Sweet!

FOURTH: We have a pair of tickets to giveaway to the 5/25 screening! Let us send you to both the movie and the show. Write us a love letter (short poems also accepted) and email it to tig {at} threeimaginarygirls {dot} com with the subject line "Phantom of the Paradise". This is super-short giveaway, so we'll pick a winner early on Thursday AM. Send ‘em now, people!

FIFTH: Paul Williams is scheduled to be in Seattle to attend the documentary screenings, which means he could possibly show up at Sean’s show! Can you imagine how rad that would be? I am imagining it right now!

{Sean Nelson Sings the Songs of Paul Williams | Friday, 5/25, 9:30pm | Sorrento Hotel Fireside Room | $10, or free with SIFF pass/ticket stub to Paul Williams Still Alive. The movie screens at SIFF May 25, 6:30pm at the Egyptian, and again May 26, 1pm at SIFF Cinema Uptown}