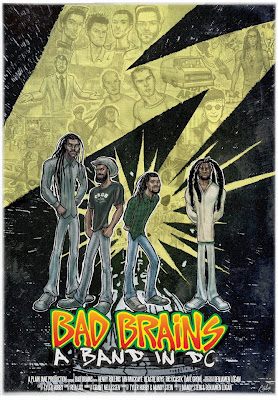 {Bad Brains: A Band in DC screens at SIFF on May 23rd, 9pm, at the Harvard Exit}

Mixed emotions are my typical reaction to learning about a new music doc on a band I love. A fellow I was discussing this conundrum with while waiting for something at SXSW agreed, "The best ones are often the ones where you really know nothing about the band beforehand." The truthfulness of that statement knocked me back for a moment. If you already know a lot about the band, how much will you really get out of the documentary? And there's always the time documentary makers have to spend time pointing out how significant a group is – when you already know all that.

So it's with this sense of diminished expectations that I watched Bad Brains: A Band in DC, to my knowledge, the first comprehensive film solely about this seminal hardcore punk band. Thankfully, most of that worrying was for naught. In the end I thoroughly enjoyed the film. It's made up of great footage and intensive interview material tightly edited together. Producing a very watchable and informative, unvarnished look at one of the most important bands – ever. That's not just Henry Rollins and Ian MacKaye saying that – it's me saying that.

Point being, if you like punk rock, if you like music docs, or if you've never heard of the band and want to learn some true American history – see this movie when you can. There's one more SIFF opportunity left but I am hoping it'll make a return swing through Seattle at some point.

The entire history of the band is covered, from pre-inception through the present day. Rather than linearly drag us along this path, the filmmakers wisely intercut bits of history throughout. We meet the band on a recent tour, where some clear tension has arisen (there's yelling about being a sellout from what I recall). Not really surprising, I'm not sure there's any group whose members have a perfectly smooth relationship after 25 plus years together. Nevertheless, those early scenes may feel familiar to anyone who's watched a recent (or any) doc about aging rockers who've grown up together. They still want to play, they're perhaps not as intense as they once were, and there's always at least one member of the band who seems to be less than a healthy member of the ecosystem. Typically for whatever reason it's their front-man. All of that is on display from the opening scene. Thankfully, we're drawn back in time quickly to better understand the origins of the boys who became the legends. With great access to the spaces and people that were around at the start of their DC based career the basics are fleshed out (how they met, the inspiration for the band's name, where they played) while rewarding fans with lots of nuggets that are new (at least to me).

For those not super familiar with the band the basics of what made them stand out is covered – and demonstrated through archival footage. Much like the recent Fishbone documentary, the fact that this was an African American band within a largely white punk scene certainly can't be ignored. The more notable minority though these guys belonged to was punk musicians who could seriously play their instruments. That sounds like the age old 'zine joke ("What did you guys learn to do this summer? We learned to play our guitars.") – but I think even a non-fan of the hardcore genre can immediately recognize that the Bad Brains are a musical cut above. Their style is hypnotically catchy with a hook that your brain can't say no to. It's just that they're playing 10x harder and faster than your a person can fully take in. So it's pretty accurate when their bassist remarks, “We were gonna play faster and more technical than The Ramones and be more chaotic that the Damned.” Not to take anything away from either of these bands, The Ramones live were the only other act I've ever seen in my life that brought a show to life the way The Bad Brains did in their prime. But The Bad Brains were the perfect storm of skill and style – and as the film points out the inspiration for a wide swath of music making somebodies.

There's a ton of archival footage, and the sound quality of it is good – actually the sound quality of the picture is across the board good. This isn't some slapped together production. Animation is used to transition between scenes and as a backdrop for some of the oral history. It's all used to strong effect to map the musical and lyrical focus of the band from positive attitude hardcore, to their adoption of Rastafarian principles, and their musical shift to include a reggae sound. The early DC hardcore scene is traced as well, along with their migration to NYC in response to truly being banned from the limited number of DC venues available at the time. There's tons of details in this film about what they did, what they're doing, and a few choice quotes from Dr. Know's mom. I am resisting the urge to walk through every one.

All in all it's a complicated story and directors Mandy Stein and Ben Logan have created a digestible package out of it all. If I could change one thing I might trim the time spent focusing on HR's odd behavior in favor of some more time on their history, lyrics, or anything else. Something's a bit off there and if it could be gotten to the bottom too it'd be fascinating. But that situation is a bit indecipherable and as such I'd have rather learned a bit more about the other band members. Learning that Dr. Know manages an organic market outside Woodstock for example is a lot more interesting than trying to armchair diagnosis what's going on with their lead singer. That's covered, but if I could change one thing it might be to poke around more in the other band member's lives.

I definitely recommend music fans checkout out this movie. If you don't believe me, here's a much longer take I wrote after SXSW that basically says the same thing.