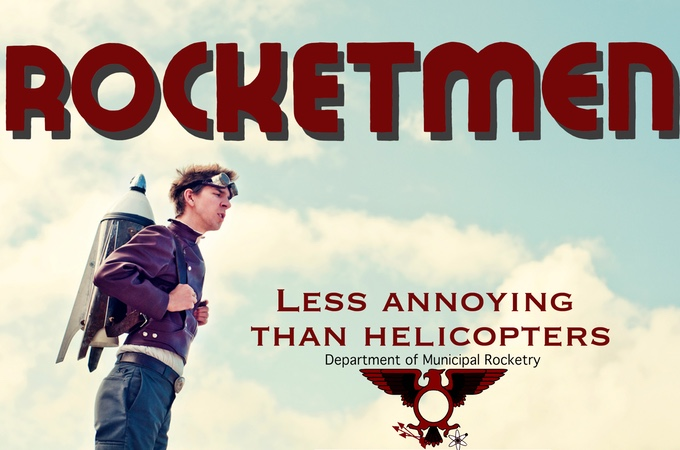 Standing on a rooftop in downtown Seattle, for decades untold (well, somewhat told—since the 30s anyway), a squadron of patriots has stood/sat/played badminton, awaiting the signed triplicate forms that would ever-so-occasionally launch them into duty. They are brave. They are dapper. They are… The Rocketmen! Yeah! More specifically, the Department of Municipal Rocketry. Founded as a WPA project to combat the Soviet threat of Communist Rocketmen and also giant robots. We cannot, and shall not, have a rocket gap! What’s that? No, no, not a jet packs. Rockets. Rocket fuel. Hydrogen. Yes, the combustible kind. Yes, they’re extremely dangerous. Look, we’re getting off track here.

The Rocketmen come from all walks of life. Some walks of life. A few walks of life! Assigned to this astonishingly dull posting after being out of work for some time! Like true patriots! But all is not well in Seattle. Things are going awry, and some people needed their library books picked up months ago, and Elton John is on the terrorist watchlist, and hydrogen leakage causes hallucinations and possibly levitation, and Richard Nixon’s bad poetry has been weaponized, and the giant robot might be unexpectedly slow, but still, giant robot, and no amount of flirting with the woman who lives beneath their rooftop headquarters is going to save them.

Rocketmen was developed as a web series, and if there is any justice in our fair land, it will get a release, and Webster Crowell (Stranger Genius award winner 2003) will shoot more episodes, with more animated special effects and clever Arrested Development-caliber callbacks and The Tick-caliber everyman superhero loopiness. But just in case, sneak out early on Monday and go catch it.

{Rocketmen screens at SIFF on Monday, June 5 at 4:00 PM, at SIFF Uptown Cinema}