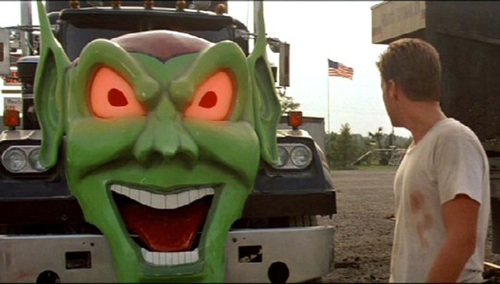 I was delighted to see that one of my favorite cheesy movies from the 80s is making an appearance at Central Cinema this month: the over-the-top adaptation of Stephen King’s short story Trucks, written and directed by the horror maestro himself.

Maximum Overdrive is a prime example of extremely bad movie-making (and of why King should never get behind the camera), yet I still love every horrible second of it because it’s one of the first horror flicks I saw at the impressionable age of 13.

Starring a cast of characters including heartthrob Emilio Estevez and squeaky-voiced Yeardley Smith (AKA: Lisa Simpson), this “machines gone wild” fantasy involves cars, trucks, and all manner of appliances trying to kill their human creators(??), and features a grinning Green Goblin semi and a murderous soda machine (I swear I didn’t just make that up). AS IF that wasn’t enough to get you there, the soundtrack is composed entirely by AC/DC, making the $8 ticket price a complete bargain!

Purchase your ticket in advance online, or line up on Monday, 3/28 for the 7pm showing. Because honestly, a pizza and a pitcher (or two) of beer are really the only good way to see this 1986 masterpiece.