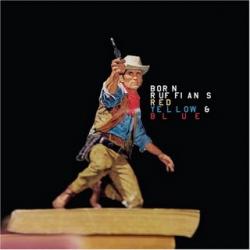 Somehow, I feel like we've all missed out on something with the Born Ruffians. At least in my little corner of the world, there was little hype and fanfare for the band's first real full-length. And although Red, Yellow & Blue has its pot holes and blemishes, it's one of those debuts where you know that this band has masterpiece buried in there somewhere if they can keep their act together long enough to record it.

Born Ruffians are the direct descendants of Modest Mouse and the Pixies (and Frank Black) and can easily be lumped in with their modern rock brethren Clap Your Hands Say Yeah!, Tapes 'n Tapes, and the Arcade Fire. Sure, that list is somewhat plagued by “it” bands that have invariably lead to disappointment, so maybe the lack of over-excited hype for the Born Ruffians might work in their benefit.

Red, Yellow & Blue is a collection of solid modern rock songs that have all the requisite bits: (a) call-and-response vocals; (b) lots of guitars and; (c) and a frantic pace. There is no lack for energy, even when the album opens on slowly-building title track. The first single “Hummingbird” is a perfect little modern rock song, with a healthy rhythm section that meshes with the guitar that warbles up and down the spectrum (and the pacing perfectly mimics the frenetic lifestyle of a hummingbird). Even the oddly named “Badonkadonkey” has an undeniable charm to it, much like one of the real high points on the album, “Foxes Mate for Life." The latter is a laid back song that obviously draws from the Modest Mouse quiver (albeit not as much as the carbon copy “Hedonistic Me”). “Barnacle Goose” is genetically derived from the gem of their debut EP, “This Song Will Save/Ruin Your Life,” just not as catchy. Of course, it is exactly what you might expect from a band like Born Ruffians, which does not work in the favor, at least in setting themselves apart from the crowd.

The band obviously still wears its influences on its sleeve, which isn't too uncommon for a young band – both in terms of the age of its members and the duration of its existence. The next step for the Born Ruffians will be to transcend their desire to be their idols and instead want to be like their idols, i.e., great musicians. Red, Yellow & Blue has all the growing pains of a young band, but it also has a lot of the hallmarks of a band that might be something special in the future.