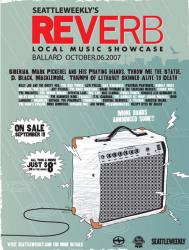 Brothers of the Sonic Cloth

REVERB 2008: Brothers of the Sonic Cloth

Seattle band Brothers of the Sonic Cloth — the latest project from Tad Doyle of Tad — sounds priestly, and the astral musical communion it offers is both deeply spiritual sounding and perhaps death rattle bone shaking at the same time. Obviously adored by adorable-herself KEXP Audioasis DJ Hannah Levin, the band played tribute to Doyle's power and beloved place in the history of Seattle music, but also reminded the future that the past is chewing on its ass (and vice versa).

6 PM may have seemed a little early for a space rock buzz this strong, but the lean set was filled with so much delirious expectation and delicious tension from the club's packed pile of fans that the pay-off, played out by Tad on his guitar and from-the-hollow-earth vocals, the drumming of Eric Akre, and the mesmerizing bass playing of Tad's gal Peggy, could have happened in any arbitrary frame of time.

As Brothers of the Sonic Cloth drew whoops of tribute from deep in the lungs of younger fans who have discovered that Tad was one of the very best things on Sub Pop, and not as many older grunge-hounds as you might have guessed, it's clear that Levin's choice for the first Audioasis broadcast was canny and astute. This could easily silence any KCMU fans who think that KEXP still doesn't have the raw guys to obliterate the airwaves with pure rock and roll apocalypse.