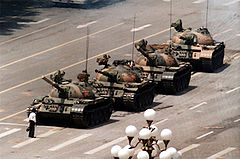 It looks like it is finally happening: Chinese Democracy will finally be available in stores.

Beyond enticing pre-Thanksgiving shoppers, the move is tied to the structure of Best Buy's sales week, which runs from Sunday to Saturday. As such, "Chinese Democracy" would not be eligible to chart on The Billboard 200 until the week of Dec. 1, according to Nielsen SoundScan.

This record's production costs reportedly top $13 million and has taken more than a decade to finish. It has been a long-running joke for many years. One blogger has even been visited by the FBI and later arrested for leaking songs from it. Dr. Pepper promised every single American (ok, not everyone, everyone but former guitarists Buckethead and Slash) a can of pop if the record is completed.