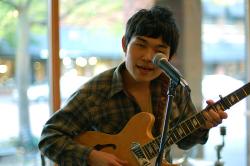 Before I talk about the one-man Asian sensation known as PWRFL Power, I must mention the pre-show antics of comedian David Cope. Seattle Weekly had comedians from the People’s Republic of Komedy introducing artists all through REVERBfest. His set varied from jokes about his Hyundai Accent to a starring contest with Ben (some random guy with a kazoo). You can check out the People’s Republic of Komedy at Chop Suey on Wednesday nights, where they have a running show called Laff Hole. Do it, because he obviously needs money for a new car.

I unfortunately did not get a seat for the PWRFL Power show (since I felt like I had to down my coffee before entering Miro Tea). The small tea house was crammed with people of all-ages to see the show. Then, Kaz Nomura, a humble Asian man with a strong accent who performs under the moniker PWRFL Power, stepped up to mic and began to sing and play guitar.

I’m not sure what they slipped into Kaz's tea, but it sure made him perform well. He played an awesome set, where he sang about being yourself and falling in love with a boy. Can’t go wrong with that. Although he was very petite (can you use petite for men?), he was able to lug around his guitar like I did with my chop sticks later on that night at Thaiku, which was very tasty. He was entertaining to look at and listen to. I think I found my cup of tea. (Damn, I’m good!)