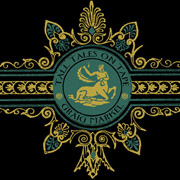 The Animals at Night was a surprise discovery to me at REVERB, when my pal Jenny George suggested a detour to the Tractor to hear "Graig Markel's new electronic project." So detour we did.

The band was indeed as she said, with Markel and co fiddling on a couple of Macs onstage, as well as MIDI keys and hybrid drums (a snare, kick drums, and high hat as well as electronic drum pads), and occasionally, lyrics. The Animals at Night certainly represents a departure from Markel's more rockin' music of the past, much in the same way that Head Like a Kite was a 180 for Sushirobo member Dave Einmo (who was also at the show), a comparison brought even more to mind because I've seen Markel join Head Like a Kite onstage in the past.

I've tried to do some research on the band's history and formation, and all I've found is this paragraph from the Seattle Weekly… but it seems descriptive and apt:

The Animals at Night, the project of Graig Markel and Jeffrey McCallum, create down-tempo electronica that cascades and shimmers as much as it pulsates and throbs. Wavering synth and organ provide the foundations for their songs, which they layer with beats that sometimes bump and sometimes jab. As the songs move along at the pace of a cool breeze, Markel and McCallum pepper them with samples of R&B, soul, funk, and 80s synth pop, the kind of stuff that sounds great whether you're at the clubs, or at home by yourself tripping on acid.

Yep, what they said. I've also heard mention of a record in the works (which will feature Seattle notables like Eric Corson of the Long Winters on bass and Nabil Ayers of the Long Winters on drums, among others), due out in March 2008. You can stay posted on the goings-on of the band on their website, or go see an Animals at Night DJ set at Hazelwood on October 26th.

And check out this video from the show to hear (and see) it for yourself!