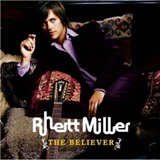 The Believer, the latest solo record by the lead singer and lead heartthrob of the Old 97's, Rhett Miller, is a straight-ahead pop rock album with feel-good flair. For twelve tracks Miller strums and sha-la-la's his way through songs about "sex, war, love and death… but mostly sex," he says.

There's more vitality and naturalness in this record than Miller's previous effort, The Instigator. "Delicate" is a rousing, hair-flipping, ass-shaking kind of ditty we came to know from Rhett when he was backed by his Old 97's. "My Valentine," the opening track of The Believer, is another jaunty number worthy of any iPod playlist to a sweetie. Miller treads on adult contemporary territory in some spots, such as the poppy "I'm With Her," but he balances such understated tunes with rockers and rollers like the T-Rex-inspired jangler "Ain't That Strange" to keep up a youthful appearance.

On The Believer, it feels like he's going for the solo route – though I don't want to think the 97s will ever break up. With the impressive array of people on this record, one might think his new label, Verve Forecast, was 'going for it' too: Miller's backing band on the album includes stellar session drummer Matt Chamberlain, and frequent Miller collaborator Jon Brion plays keys and guitar on some tracks. Solo sensation Rachel Yamagata guests on the sultry country ballad "Fireflies," and Aimee Mann and Brion co-wrote the one cover song on the record, "I Believe She's Lying."

But I doubt there's any record-industry foulplay here. Miller seems too sincere of an artist to get caught in such an obvious sham. His frank devotion to the music medium is clear in the live arena. And in person, or in cyberspace, Miller's earnestness never wavers. Case in point: his myspace account. Miller takes great strides to assure it's really him running that site instead of publicists fronting as him. During the week of the album's release, a publicist's missive slipped through on the bulletin-board section, and within three hours the real Miller had posted a response, explaining that the previous entry was not his own, and that he'd be chatting with the label to assure any future entries from 'the man' were labeled as such.

Perhaps as an attempt to show Miller hasn't forgot his band and those fans, two 97's tracks find their updated way onto The Believer: "Question," the ultimate marry-me song, and "Singular Girl," a track originally released on the bonus disc to Satellite Rides.

All in all, The Believer is a strong effort. It rocks, it rolls, it bounces and shakes, and it's an all around great poprock album. It could well take Miller to solo-artist stardom should he want it, or it could be a good addendum to the library of Old 97's sideprojects.