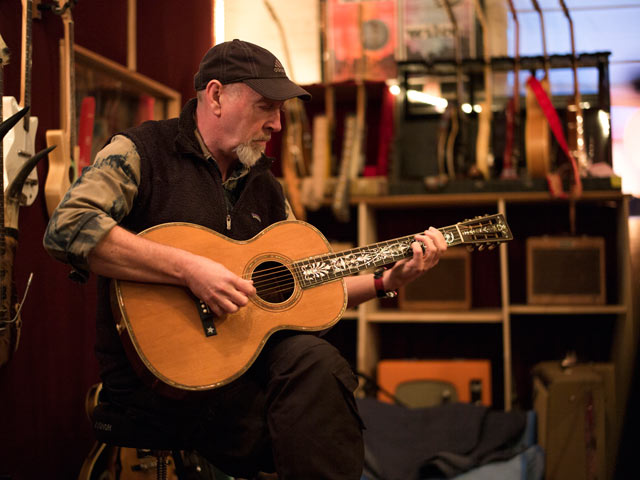 See Richard Thompson as he plays solo/acoustic for three consecutive nights at the Triple Door in Seattle – May 16-18, 2017 {get tickets / more info}.

Close your eyes next week when the incomparable Richard Thompson plays “1952 Vincent Black Lightning.” You’ll swear there are 3 guitar players. You’ll melt at the love story, at Red Molly and her seducer James, who catches an unfortunate shotgun blast in the chest, and blithely says, “I’ve got no further use for these” as he hands Red Molly the keys to the Vincent Black Lightning.

Oh yes, the anxiety of influence, the realization that nothing is new except for everything. The love story? As old as time. The guitar work? Incomparable. And the whole package? Overstating its impact is all but impossible. Thompson’s a more prolific Leonard Cohen in the way he relentlessly writes, sings, and plays in an immediately Thompsonian groove.

Yes, Thompson’s songs are lovelorn (crank “Walking on a Wire” to hear a razor-sliced heart and a marriage dissolving on tape). He scrambled the folk message with rock trappings and dynamics in Fairport Convention before the Summer of Love even cracked open. And in that, he helped make the world safe for raggedy folk as it collided with hipster rock. It’s as if he knew that someday there’d be agit-folkies aplenty (think of it: all from Violent Femmes to Fleet Foxes owe him big-time).

And that’s how he comes to Seattle for a three-night stand, with just him and a guitar. When I first caught him live, Thompson played the Moore touring on his ’96 album, You? Me? Us?, and the show was disarming: All stripped-down and acoustic with everyone seated, hushed, even though we all knew Thompson could tear it up mercilessly. I’ll admit, I feared I’d be bored by the sitting. And yet, he held the audience in his hand, squeezing at times and toying with us at other times. All he did was blow us away, like it was the easiest exercise in rock ‘n’ roll.